Russia is considering buying Chinese yuan and currencies of other countries considered friendly for a total of $70 billion this year.

The move is intended to slow the sharp rise in the ruble. Russia then intends to move to a longer-term strategy of gradually selling the Chinese currency it has bought to finance its investments.

Russia was already buying Chinese currency before the war

Even before the invasion of Ukraine, Russia had been increasing its yuan investments as part of its diversification efforts and had become one of the largest holders of Chinese currency reserves in the world. It thus supplemented the substantial euro and dollar reserves it already held.

As of the first of January this year, the Chinese yuan had a share of about 17% of Russia’s reserves, representing reserves of more than $100 billion. Thus, it is expected that Russia could hold a total of $170 billion to $180 billion. However, we do not have closer information because the Russian central bank stopped publishing details of its reserves after the imposition of Western sanctions. 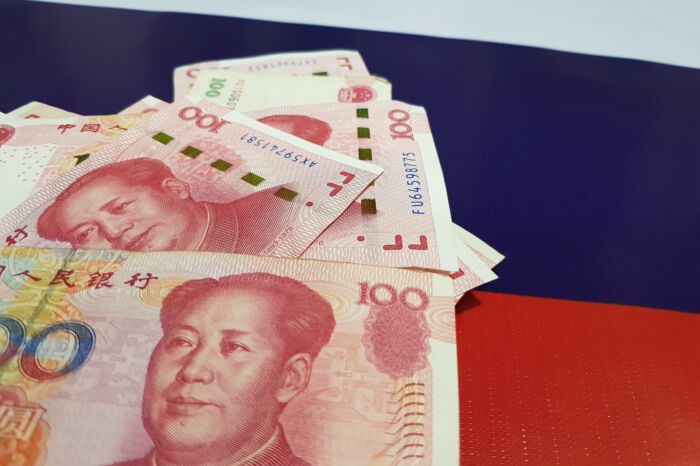 It was clear that Russia would find it difficult to return to dollar hedging after more than $300 billion of foreign exchange reserves were frozen. So we can see a gradual move away from the dollar as the main reserve currency.

The increasing cooperation between Russia and China can be noticed in several ways. In addition to the aforementioned purchase of foreign exchange reserves, we see a significant increase in mutual exports, especially oil exports from Russia to China.

Russia doesn’t have many other alternatives

However, if Russia wants to maintain some form of diversification, it cannot rely entirely on the Chinese currency, the yuan. As the situation in the Arab world has long been unclear due to political risks. Another friendly country, Turkey, is struggling with very high inflation and is thus at risk of devaluation.

If we look at Russia’s other potential allies within the BRICS group, we do not find another country with a properly stable currency and economic situation. Thus, we can still expect Russia to stick to the dollar and the euro to some extent.