Today's US labor market data will surely cause some large volatility.

The USD/JPY pair pushed above the psychological level of 140 on Thursday, reaching the highest level since 1998 as the broad US dollar strength continued to dominate the FX markets.

On Friday, traders are reluctant to continue with USD buying as they are waiting for the crucial labor market release from the US.

Focus on US jobs market

In the US, the August nonfarm payroll report, due later today, is anticipated to reveal that 300,000 jobs were created in August, while the unemployment rate is predicted to stay at 3.5%.

Even though this would reflect a decrease in employment growth from July’s 528,000, it would still be the 20th consecutive month of job gain and probably back the Fed’s decision to continue aggressive rate rises to the dollar’s advantage.

Up to a 75% possibility that the Fed would raise interest rates by 75 basis points at its policy meeting in September is already included in futures markets.

The USD/JPY pair has been most severely affected by this prospect of more Fed interest rate rises because traders increasingly see a widening interest rate differential.

Investors’ worry about a potential Japanese FX intervention to sell USD/JPY has diminished. While it is well acknowledged that the Japanese government would attempt to halt this trend (the USD/JPY is over 140 for sound macroeconomic reasons), intervention should not be entirely ruled out.

“Any sharp near-term move to the 142/143 would probably spark a much sharper verbal protest from Japanese authorities and put intervention back on the agenda.” economists at ING reported Friday.

You may also read: US restricts chip exports to China

Shortly after, Shunichi Suzuki, the minister of finance for Japan, stated on Friday that they would address foreign exchange if required. According to Suzuki, currencies need to move stably, reflecting economic fundamentals. This is because recent FX market moves are significant.

The short-term support is now at 140, but if today’s US data disappoints, we might see some stark profit taking, likely dragging the price deeply below 140.

Therefore, opening new long positions during these overbought might be risky. However, on the upside, the next target could be in the 142-143 region.

Alternatively, the support is seen near 137, and if not held, a more significant correction toward 134 could occur. 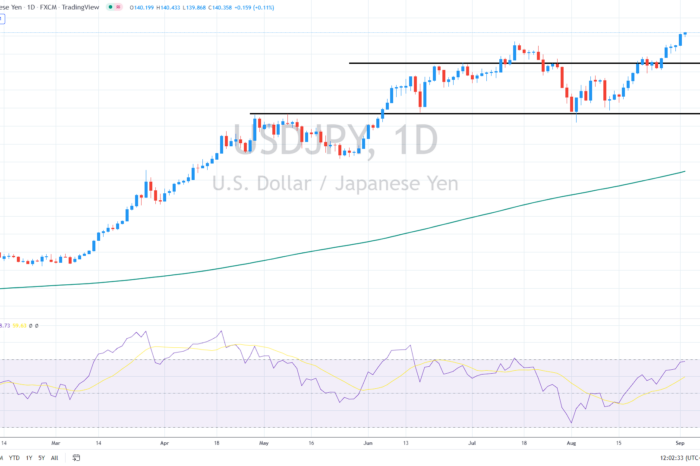