The Turkish lira is well known for its uncontrollable inflation and long-term depreciation against other currency pairs, such as the euro or US dollar. Now the situation in Turkey is getting worse because the president of Turkey, Tayyip Erdogan, failed to deliver his promises. 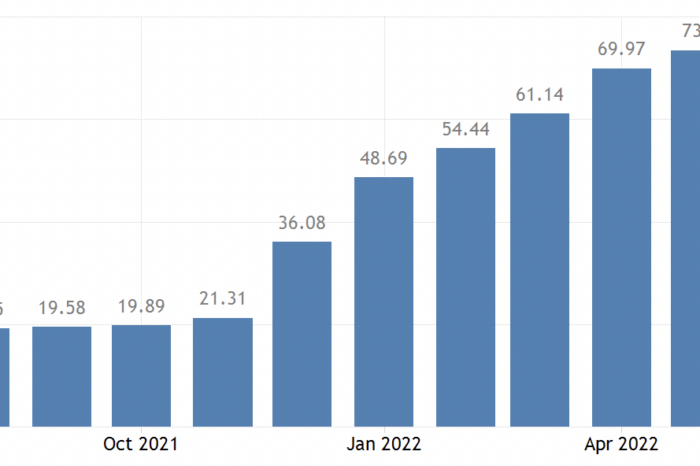 The problems came when the Turkish lira started collapsing against the US dollar at the end of 2021. USD/TRY grew from 7.5 to 18, rising by more than 100% in a single year. While Euro Area and the United States are fighting 8-9% inflation, and it causes a worldwide crisis, Turkey is used to a 20% inflation. However, when 2021 ended, it broke this critical level and grew to 36% in January 2022 and has not stopped rising since. 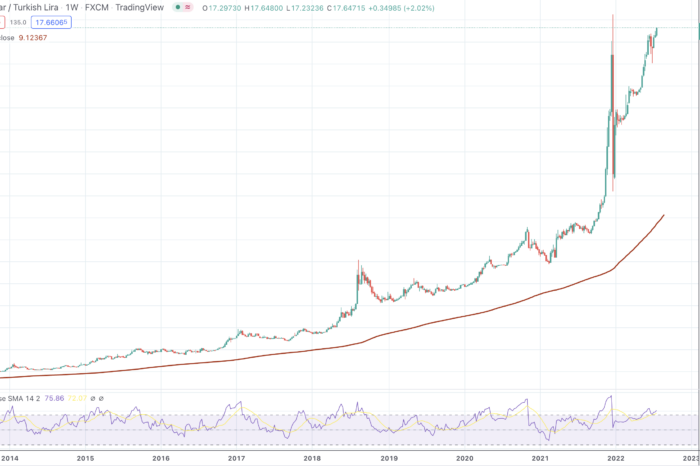 Although the Turkish central bank lowered interest rates several times at the end of 2021 from 19% to the current 14%, inflation started getting out of control, and the Turkish lira has been under attack ever since. There is a long-term uptrend on USD/TRY, but most corrections downwards were of a 10-20% size. However, the vast price surge and the president’s promises to tackle inflation led to one of the most significant price declines of this currency pair in decades, falling by more than 40% in just a week.

You may also read: Is USD/RUB ready to skyrocket again?

He promised one thing, but actually, the opposite happened. The inflation rate skyrocketed from “common” 20% to the current 78.6% in June, and the situation is totally out of control while USD/TRY is slowly approaching the all-time high level of 18 from the end of 2021. Moreover, the global price increases in goods and services even worsened the already dire situation in Turkey. Therefore, if USD/TRY breaks level 18, nothing is stopping this currency pair from skyrocketing again.

Traders can even see a giant triangle pattern forming in the chart, so both technical and fundamental analysis say the same thing. USD/TRY might be near forming a new ATH, but it also may be challenging to determine how high it can go. Nevertheless, some analysts expect this currency pair to continue to rise as there is no reason for it to go down at the moment. 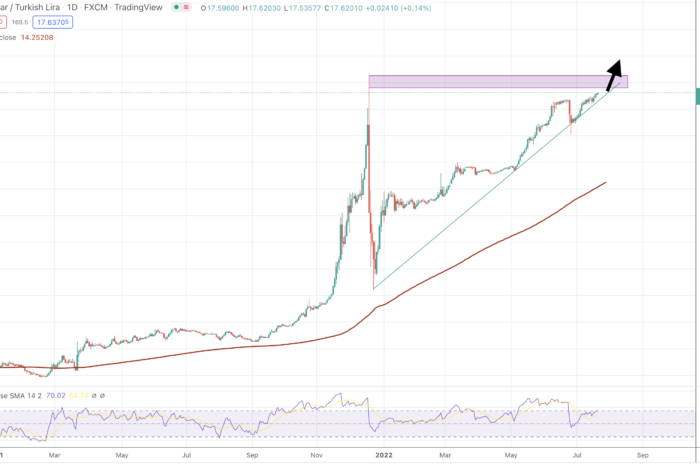 According to data from the central bank, the Turkish currency is so despised that more than half of Turkey’s savings are held in other currencies and gold. Some Turks have even turned to digital assets in an atmosphere where the national currency is losing value virtually every day in an effort to protect their money from devaluation. As a result, the nation is basically looking for any ways to protect their wealth, running away from their own currency.

While older generations rely on stable assets like gold or real estate, the new generation favors popular cryptocurrencies. It is estimated that millions of Turks hold crypto assets despite many countries trying to ban them. However, while Bitcoin and altcoins may deliver fantastic returns, the current bear market connected with high inflation in all fiat currencies could cause many Turks to panic as it is hard to find a stable way to keep their savings.

Even though the president of Turkey tried to bring inflation down, the ongoing global crisis is making it harder. The inhabitants of this nation learned how to fight the high inflation rate by converting it to foreign fiat currencies, commodities, real estate, etc. However, the meltdown in financial markets is making it difficult to protect money as everything is losing its value, and new ATH on USD/TRY is very probable in the next few months. Hopefully, Turkey is not another candidate for hyperinflation.