It looks like a little pause before another leg higher in EUR/USD, targeting the psychological level of parity.

The single currency halted its yesterday’s rally as it traded near the 0.99 level against the USD, likely regaining strength ahead of the push toward parity later in the week.

The leading German IFO Business Climate Index declined marginally in October from its previous reading of 84.4 to 84.3, which was in line with market expectations of 83.3.

In contrast, the Current Economic Assessment decreased in the reporting month from July’s 94.5 to 92.4 points, as was predicted.

The IFO Expectations Index, which represents businesses’ expectations for the following six months, increased to 75.6 in October from 75.3 the previous month and above predictions of 75.0.

As a result, an impending winter recession, according to institute economist Klaus Wohlrabe, was predicted following the publication of the German IFO Business Survey.

Furthermore, in October, 63.8% of businesses reported supply chain bottlenecks, down from 65.8% in September. In the next three months, one in two businesses still plans to raise prices. At the same time, expectations from retailers are at a new record low, and the German GDP is predicted to decline by 0.6% in Q4.

In other news, Robert Habeck, Germany’s minister of economy, stated on Tuesday that “the gas pricing mechanism decision at the next EU Council is expected.”

Habeck continued, “Joint EU purchases are the greatest way to keep the gas price down.”

In the US, early October saw the private sector’s business activity continuing to decrease at an increasing rate, according to US S&P Global PMI surveys released Monday.

This supported the notion that, following the anticipated 75 basis point rate hike in November, central bank policymakers were reconsidering the magnitude of upcoming rate increases.

According to people familiar with the Fed’s thinking, the Wall Street Journal reported late last week that it would be less obvious how quickly rates will rise after the increase in November.

Later today, the housing price index and S&P/Case Shiller Home Price Indices data will be included in the US economic calendar. The Conference Board will also present its October Consumer Confidence Index.

The technical situation is starting to look bullish again. If the Fed slows its aggressive rate hikes, it could be a notable bearish signal for the greenback. At the same time, we are seeing a breakout from the massive long-term bearish channel, likely implying further strength for the single currency, targeting 1.035 in the medium term. 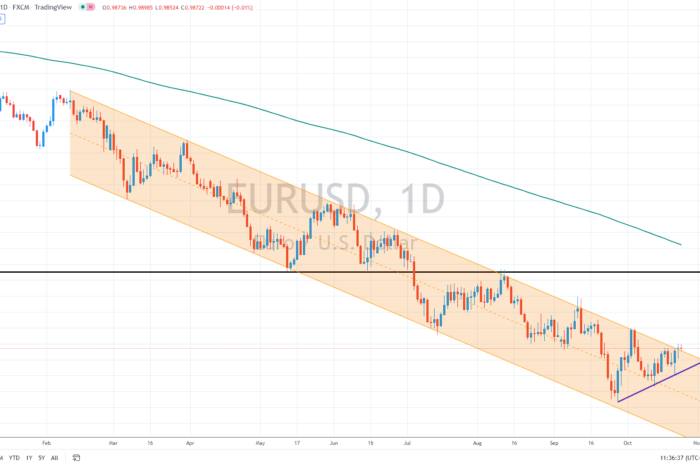