The electric vehicle manufacturer saw its shares fall as much as 7% on Monday morning following the company's decision to lower the price of some of its cars.

Following the company’s decision to lower the price of some of its cars in China, Tesla shares fell as much as 7% on Monday morning. Late-morning trading saw them down roughly 5%.

One of the company’s most important markets, China, saw price reductions for Tesla’s Model 3 and Model Y automobiles.

With its pricing reductions, Tesla partially undoes some of the price hikes it had to make earlier this year in China and the US due to growing raw material prices.

💣 Tesla traded at $246, down 7% in a single day. Looking back, the stock dropped 10.51% over the last four weeks and is down 40% from its all-time high. @elonmusk @Tesla #tesla #stocks #ElonMusk #trading #trade pic.twitter.com/WhAI7nmAvu

The price reductions also follow Musk’s statement that he detects signs of a Chinese recession.

According to Musk, China is mostly going through a “recession of sorts” in the real estate sector.

The Chinese economy continues to face difficulties, particularly as the impact of the severe Covid-19 curbs on retail sales is still felt. As a result, although the third quarter’s gross domestic product increased by 3.9% from a year earlier, it fell short of the stated objective of 5.5% growth.

Tesla’s 343,000 car deliveries for the three months ending on September 30 fell short of analyst predictions. How many vehicles were delivered in China is not disclosed by the manufacturer. Tesla also fell short of third-quarter sales forecasts from analysts.

But according to the China Passenger Car Association, Tesla delivered 83,135 electric cars built in China in September, setting a new record for the firm. In Shanghai, China, Tesla has a sizable Gigafactory that it upgraded earlier last year.

Today’s daily bar does not look that negative at all since bulls jumped in and bought the dip, trying to erase the losses. Should the price close above previous lows of 207.60 USD, it could be a bullish sign.

The next target should be at Friday’s highs of 214.30 USD, with another resistance of 222.50 USD, the closing of the post-earnings bearish gap.

On the downside, should the stock price drop below 200 USD, we might see another leg lower. 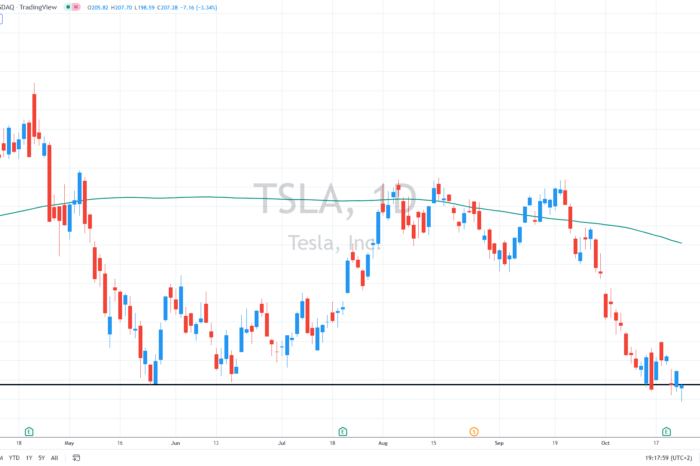