EUR/USD advances toward the upper line of bearish channel

The euro is trying to jump toward the key resistance at 1.0, but so far, the bullish momentum looks weak.

The single currency traded near 0.99 today amid the broad US dollar weakness, but the rally seems fragile, without any solid fundamental backdrop.

In the meantime, the euro appears supported by an increase in German 10-year bund yields, which are trading near their cycle highs above the 2.30% barrier.

The announcement that the European Commission would this week offer a proposal to assist the Eurozone combat rising gas costs has strengthened optimism toward the single currency.

You may also read: Suspicious activity on gold’s volume hints the next move

According to a draft proposal, the EC is planning to propose a “dynamic” price limitation for natural gas in the European Union as well as required restrictions on how much traded prices may move in a single day.

Due to the steep decline in European gas prices brought on by the warmer weather and the fact that European governments have mostly met their gas storage commitments, the energy shock is now sliding into reverse, supporting the current rebound in the EUR/USD pair.

According to the German ZEW’s headline figures for October, the Economic Sentiment Index increased to -59.2, above expectations of -65.7 and the preliminary reading of -61.9.

The Current Situation sub-index, meanwhile, came in at -72.2 in October, below both the -68.0 forecasts and the -60.5 reading from September.

According to the managers, once more, it is determined that the present economic condition is substantially worse than it was one month ago.

The likelihood that the real gross domestic product will fall over the next six months has also significantly increased. As a result, the overall state of the economy has once again declined.

Technically speaking, nothing has really changed for the euro as it remains in a long-term downtrend channel. So far, every attempt to break up from the channel has been unsuccessful.

“A quiet week for US data (just soft US housing) creates a corrective window for EUR/USD, where an obvious target is the top of this year’s bear channel at around the 0.9980/1.0000 area. We would assume that this continues to hold the correction,” economists at ING said. 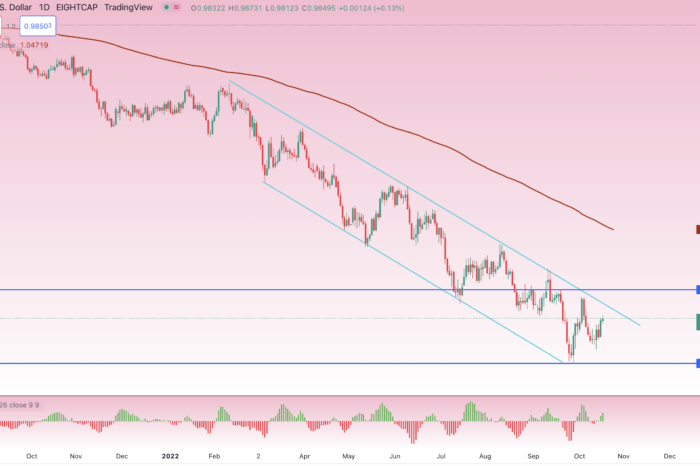