The US stock market experienced another volatile day, this time, to the upside.

The Dow Jones and other US equity indices were up 2% on Monday, soaring in what appears to be yet another short-covering rally.

As of writing, the index traded comfortably above the psychological 30,000 USD level.

Last week, retail traders bought $19.9 billion worth of puts to open. They bought only $6.5 billion in calls to open. This is the first time in history that puts were 3x calls, setting up the market for a major squeeze higher. That is exactly what happened on Monday.

Related article: Volkswagen wants to strengthen its position in China

The Dow is soaring across the board. Bank of America (BAC) and Bank of New York Mellon (BK) released quarterly results above expectations, leading to a rise in bank stock prices. Bond yields are falling, boosting the appeal of tech equities, which are rising.

However, the Q3 earnings season has gotten off to a worse start than normal, with less-than-average positive profit and sales surprises from the data that have been released thus far.

According to FactSet Research, just 69% of the roughly 7% of S&P 500 index firms that have so far announced third-quarter results have outperformed projections for profits per share; this is lower than the five-year average beat of 77%.

So far this year, the Federal Reserve has increased its benchmark lending rate by three percentage points, with more rate hikes coming this year. Stronger US currency caused by higher interest rates puts pressure on the global economy and lowers business earnings.

“An excessively strong dollar can cause an earnings recession – especially when the macroeconomic backdrop is overshadowed by the Fed’s aggressive tightening policy, pessimism among consumers and businesses, and a significant slowdown in leading economic indicators,” economists at Charles Schwab reported.

The key resistance now stands at previous lows and highs near 30,430 USD, and if broken above, the short-term uptrend might be confirmed, likely targeting the 31,200 USD zone.

You may also like: US dollar should stay supported in current macro environment

Moreover, it looks like the market might have bottomed out in early October as the price has failed to reach new lows, reinforcing the short-term bullish narrative. 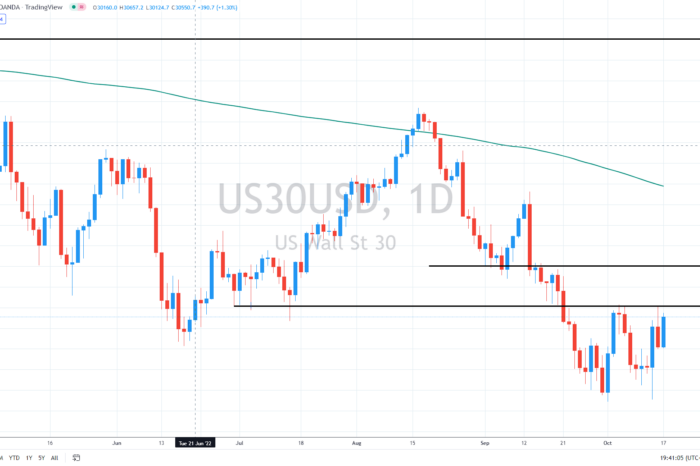