US dollar should stay supported in current macro environment

Short-term corrections are expected to be bought as the fundamental situation remains bullish for the greenback.

In a risk-friendly environment, the dollar index faced some light downward pressure and dropped below the 113.00 level at the start of the week. Declining US yields also coincide with the dollar’s decline.

Investors’ appetite for riskier assets puts the dollar to the test. Moreover, it prompts the index’s corrective move in response to a macroeconomic backdrop in which the anticipation that the Fed would raise interest rates by 75 basis points at its meeting on November 2 remains firmly entrenched.

According to CME Group’s FedWatch Tool, the likelihood of a 75 basis point increase is approximately 97%.

Related article: Weekly macro report – There is an opportunity

It looks like expectations for a dovish Fed policy shift have been delayed recently as a result of the most recent NFP and US CPI readings., likely leading to even faster rate hikes by the Fed in the upcoming months.

Therefore, the USD should be supported by the hawkish repricing of Fed rate rise expectations and escalating concerns over a rough landing for the global economy.

“Based on our current year-end forecasts, we see scope for the dollar to advance by about 5% on a DXY basis as risk aversion intensifies further,” said economists at MUFG Bank as they reiterated their bullish view for the USD.

Additionally, the dollar might continue to benefit since risk sentiment may stay negative due to the Fed’s intention to raise real rates as well as geopolitical and energy-related worries.

“We suspect that a break above the 114.70 September highs in DXY is now only a matter of time, and surely possible by the end of the week,” economists at ING are also bullish on the USD.

The first intraday resistance seems to be at previous highs in the 113.50 region. If bulls push the price above that level, we might see a quick rally toward last week’s highs near 114.00.

Should the USD index jump above the current cycle highs at 114.50, the long-term uptrend would be confirmed.

You may also read: Binance wants to invest up to billion dollars this year

Alternatively, the intraday support could be found near the short-term uptrend line at around 112.60. If the index drops below that level, the short-term outlook might change to bearish, implying further weakness toward 112.

As previously mentioned, the fundamental situation still appears bullish for the USD. Therefore, short-term corrections are expected to be bought. 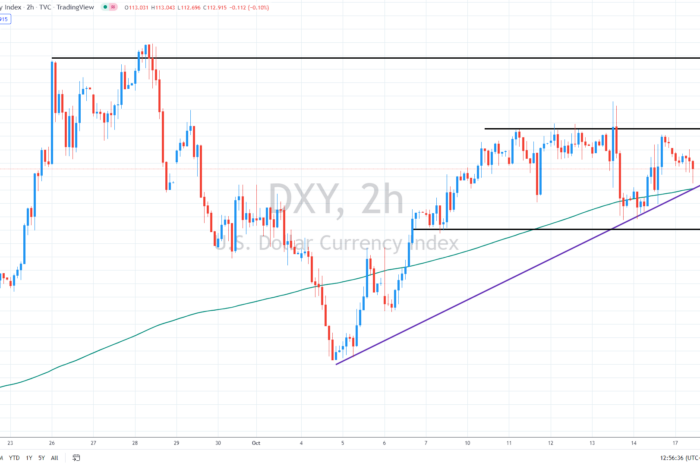