The EUR/JPY cross has recently broken out from a significant wedge pattern, likely starting a new upward move in the following days.

As opposed to remaining at 2.9% as anticipated, core inflation in Japan increased to 3.1% in December, the highest level in over three decades. Meanwhile, former colleagues criticized BoJ Governor Haruhiko Kuroda, with one telling the Nikkei daily that he was “making fools” of the Japanese public by allowing the yen to sink so drastically.

Kuroda reiterated the previous week that the bank’s stance at its most recent meeting to maintain the present policy settings was correct.

In spite of this, the yen continued to rise against the greenback as rumors of a stricter BoJ policy grew. In March, Kuroda is scheduled to leave his job, and the majority of observers anticipate the incoming Governor to adopt a different approach, likely leaning toward a rate hike.

EU recession to be mild

Meanwhile, in Europe, the preliminary factory activity report from S&P Global/BME revealed on Tuesday that the decline in the German industrial sector slowed in January, even as inflation continued to decrease.

This month, the Manufacturing PMI in the economic powerhouse of the Eurozone came in at 47.0 versus 47.9 projected and 47.1 before. As a result, the indicator reached its lowest level in two months.

In the meantime, the Services PMI increased from 49.2 in December to 50.4 in January, above expectations of 49.7. As a result, the services index reached its highest point in seven months.

“There was even a return to growth in services activity after six straight months of decline, although the increase was only marginal and achieved on somewhat shaky foundations as inflows new business remained in decline.” Phil Smith, Economics Associate Director at S&P Global, said.

At the same time, the Eurozone Manufacturing purchasing managers index (PMI) reached 48.8 in January, compared to the 48.5 forecast and 47.7 before. The index climbed to a five-month high. The bloc’s Services PMI reached a six-month best in January, rising to 50.7 from 50.2 in December and 49.8 in January.

You may also read: Stock Analysis: Lowered prices for Tesla cars could spark the demand

As previously mentioned, the euro now trades above the falling wedge pattern, usually a bullish reversal formation. Thus, the next target is near 146. On the other hand, the support of the formation is at the broken trend line near 140.80, where the 200-day moving average (the blue line) is also located. 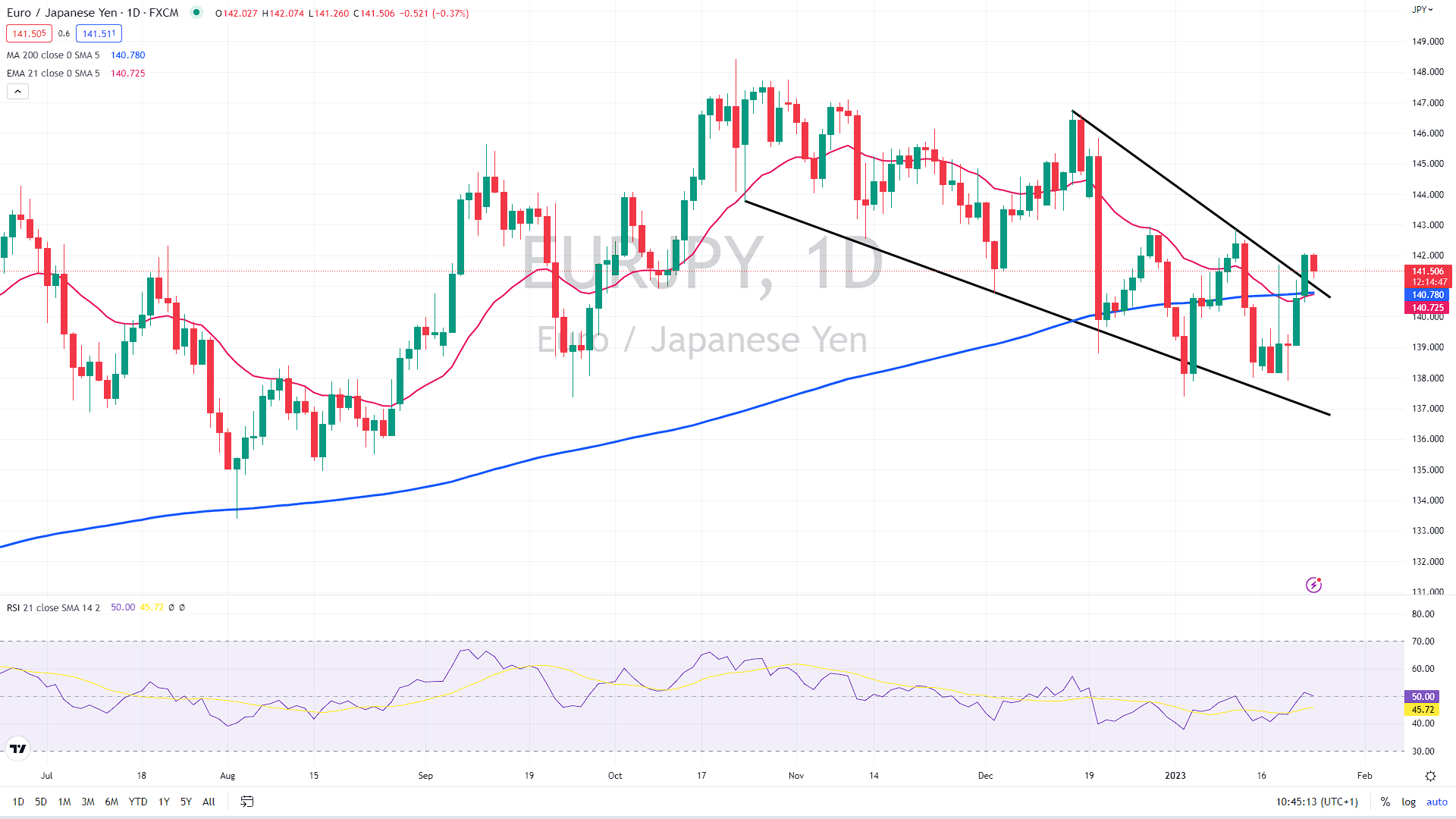