Volatility in the FX market has been minimal so far Tuesday as investors anticipate today’s Powell speech, likely setting the trend for the rest of the week in the markets.

The probability that the Bank of Japan (BoJ) would abandon its ultra-loose monetary policy is increasing as a result of the rising price pressure in Japan, which has a negative impact on the USD/JPY.

According to the most recent inflation statistics from Tokyo, the headline Consumer Price Index (CPI) increased by 4.0% as opposed to the market expectation of 4.5% and prior readings of 3.8%.

Additionally, the Tokyo CPI ex-Food and Energy met expectations, coming in at 2.7% YoY compared to 2.5% earlier.

However, after appointing a new Bank of Japan (BOJ) governor in April, Japanese Prime Minister Fumio Kishida stated on Sunday that his administration and the central bank must talk about their cooperation in formulating economic strategy.

Another interesting topic: FX outlook for 2023: where are the main currency pairs heading?

The USD/JPY exchange rate recently appeared to have been affected by recent rumors about the BoJ’s willingness to change the Yield Curve Control (YCC) policy.

“Next week’s BoJ meeting will be exciting. After the surprise widening of the yield target in December, the big question is how far the BoJ will go. If there are already signs next week that the BoJ really is moving further away from its ultra-expansionary stance, I would expect USD/JPY to quickly fall below 130.” Antje Praefcke, FX Analyst at Commerzbank said.

In the US, President of the Federal Reserve Bank of San Francisco Mary Daly stated on Monday that the central bank might either slow the pace of rate increases to a quarter-point increase or raise rates by 50 basis points for the second time in a row.

You can also read: Tech rallies after a horrible week – is sentiment turning positive?

Daly said that she anticipates the central bank would hike interest rates to somewhere above 5% before halting. “Doing it in more modest increments does allow you the opportunity to adapt to new information,” she said.

Moreover, later today, Fed Chair Jerome Powell will deliver a speech at a bank conference in Sweden. Powell is anticipated to provide greater insight into the trajectory of American interest rates and economic expansion.

Markets will be on the lookout for any shifts in the Fed chair’s hawkish tone, particularly in light of mounting evidence that US inflation is slowing.

Technically speaking, the USD/JPY pair still trades above the key support level of 131.85, giving some hope to the bulls. However, we need to see some upside momentum, possibly after today’s Powell speech, to attack the 200-day moving average at 136.50.

Alternatively, risks are mounting for a deeper decline below 131.85, likely aiming at 130 in that scenario. 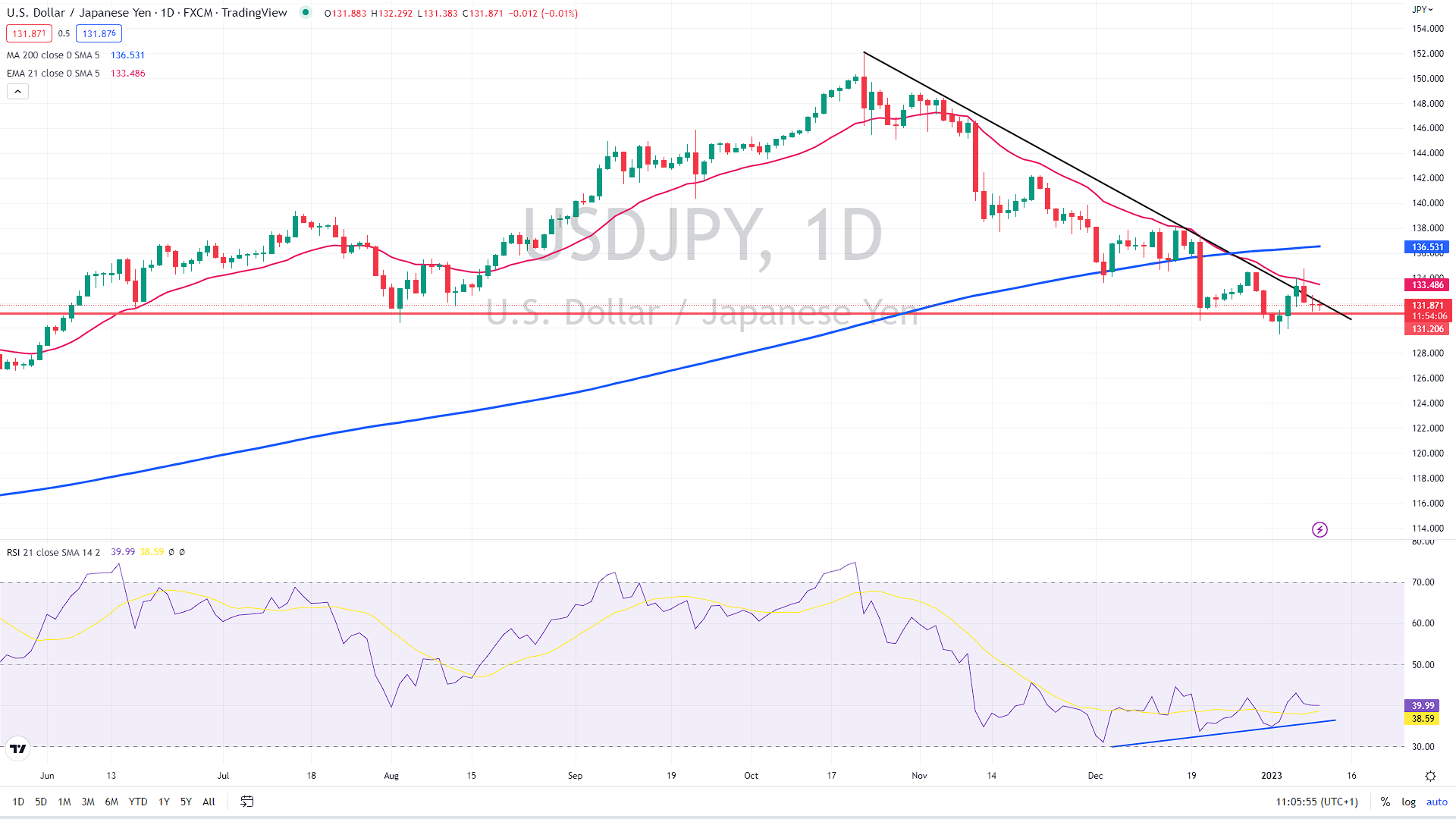