FX outlook for 2023: where are the main currency pairs heading?

The US dollar was an obvious winner against other fiat currencies in 2022, but the situation may turn around this year.

The forex market has been dominated mainly by the US dollar, which outperformed all the other fiat currencies by far. In fact, the US dollar gained more than 20% in September, making better returns than cryptocurrencies or stocks. However, it turned around and is weakening since then. Is this trend going to sustain in 2023? 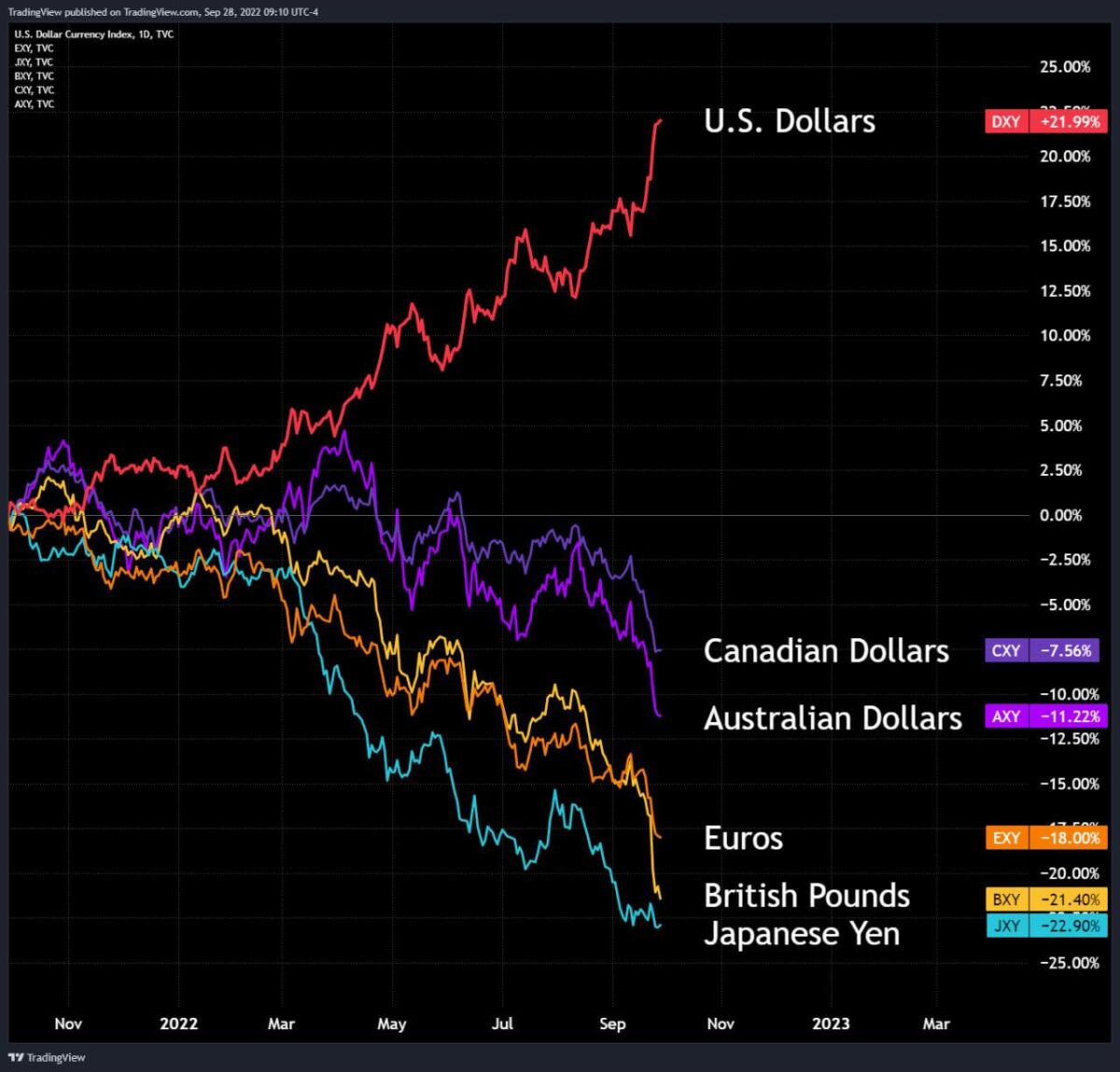 USD triumphed over the whole currency market as the Fed rapidly increased its interest rates throughout 2022. Other central banks joined later with rate hikes, trying to slow down the economy collectively worldwide. This led to a weaker dollar but a strengthening of other currencies like the euro or sterling.

Also read: How to become a better investor in 2023

As the Federal Reserve nears its likely destination and pulls back from 75 basis point (bps) hikes, the value of the dollar has reached its peak against other major currencies. Yet it continues to be extremely high and overvalued in a way. A sizable current account deficit, estimated at 3% to 3.5% of GDP (down from nearly 4% in 2022), will also need to be financed by the United States.

US real broad effective exchange rate even rose above the level from 2001 for a short while. Fed is expected to hold its interest rates high throughout 2023. This could help the US dollar, but it will eventually decline with rate cuts.

ECB may not be done with the rate hikes

Greater challenges confront Europe than the United States as the effects of Russia’s war on it will be more severe. The Eurozone now has inflation rates higher than those of the United States. The hawks of the European Central Bank (ECB) have taken control of the story and they do not believe that the current rate hike plan of 250 bps will be enough.

The ECB is sounding more hawkish than the Fed at the moment. In contrast to the United States, where demand-side elements contribute to inflation, Europe’s inflation is primarily supply-side driven, and there are few indicators of a wage price spiral.

The key is persistence and planning 💪. If you don't know how be sure to watch Investro 😎

A recession is also likely in Europe at this point although stock indices seem to be on a winning streak in the last few months. When prices begin falling sharply as the recession takes hold, the ECB may change its tone despite the wishes of the hawks.

Read more: These data hint investing in 2023 will be even worse

While the US interest rates are already almost as high as they were in 2008, the interest rate in Euro Area is only halfway through. This key rate was over 4% in 2008 while now it is at 2.5%. The ECB began lifting interest rates months after the Fed started, implying it is following Fed’s footsteps. Thus, more rate hikes are not out of question for ECB, meaning a potentially stronger euro in 2023.

A technical look at currency pairs

Now let’s have a look at four currency pairs through technical analysis. EUR/USD, USD/JPY, GBP/USD, and USD/CAD all contain the US dollar, so they are all correlated in one way or another. However, these are the major currency pairs with the highest trading volume. So what is in the books for these currency pairs in 2023?

The eurodollar bottomed out at 0.953 after falling by more than 20% in a strong downtrend. However, it bounced out of nowhere and is already up over 1,000 pips, reaching 1,0700 before Christmas. This surprising bullish move may have caught many traders off guard, but it seems the uptrend is here to stay.

Nevertheless, correction is very likely in the first couple of weeks into the new year. EUR/USD broke a crucial trend line, but it still failed to break a resistance at 1.0700. The OsMA indicator suggests the current market is obviously overbought, so a serious correction is welcomed. 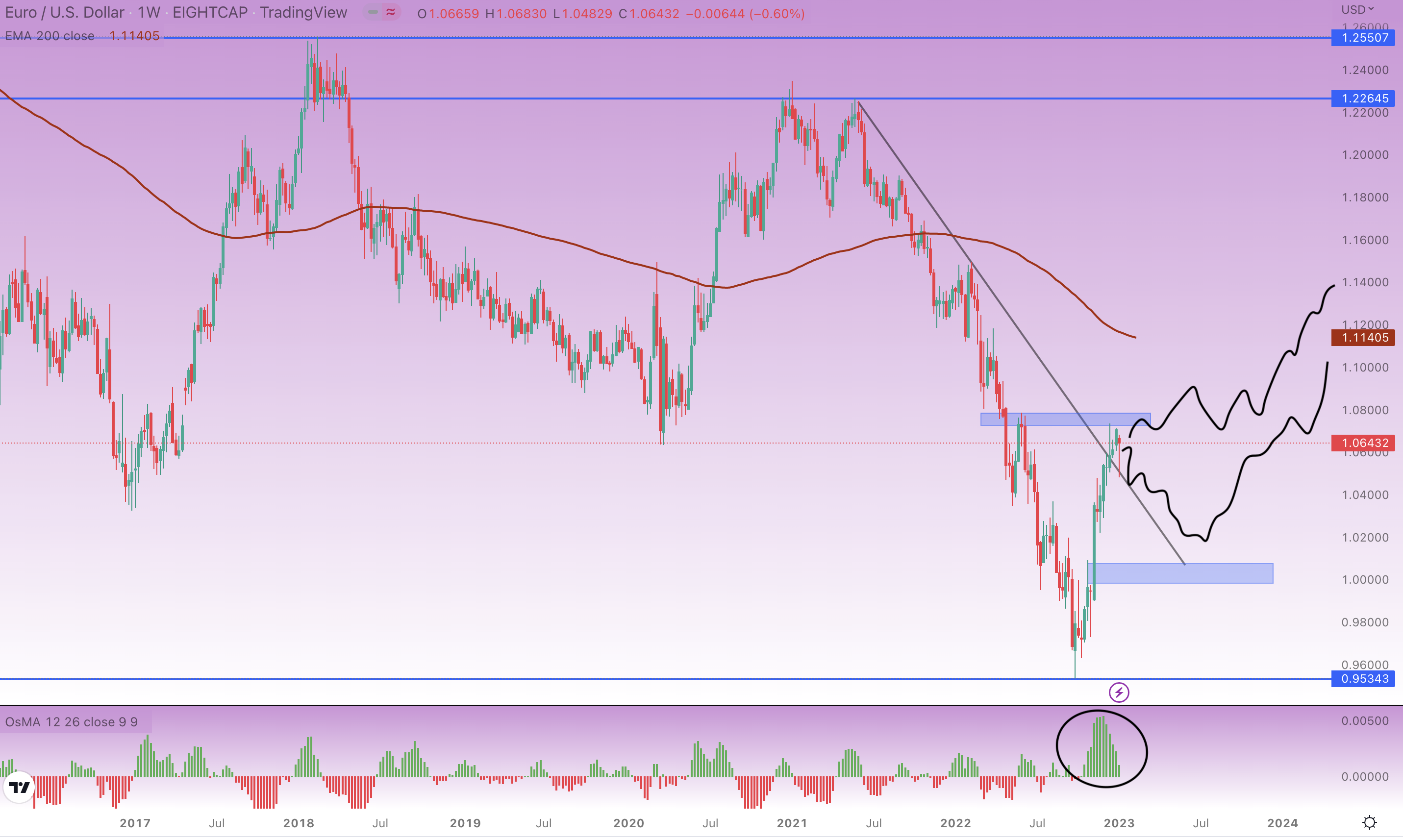 Parity would be a great zone to enter a long trade as there is an unfilled gap, but EUR/USD may not get so far. The bullish momentum will likely persist, possibly bringing the eurodollar to 1.1000 or even 1.1400 in 2023, but it will likely drop in the first quarter of this year.

USD/JPY dropped hard for the first time in 3 years

For the past few years, USD/JPY has been trending upward or sideways. There was no sign of bears really. However, that changed when the Japanese yen declined as much as 30% against the US dollar. This made the Bank of Japan (BoJ) intervene, which eventually helped USD/JPY to drop by approximately 15% in just three months.

You may also like: TOP 5 largest crypto hacks of 2022 – how much money did they lose?

High volatility is expected to continue throughout 2023 as well. But this time, USD/JPY clearly stopped at important support, suggesting it could bounce back up – at least temporarily. So USD/JPY could rise up to 140.00 in the first part of 2023, after which it may continue trending downward as a weaker dollar is becoming a new norm. However, breaking that support now would mean another potentially strong selloff. 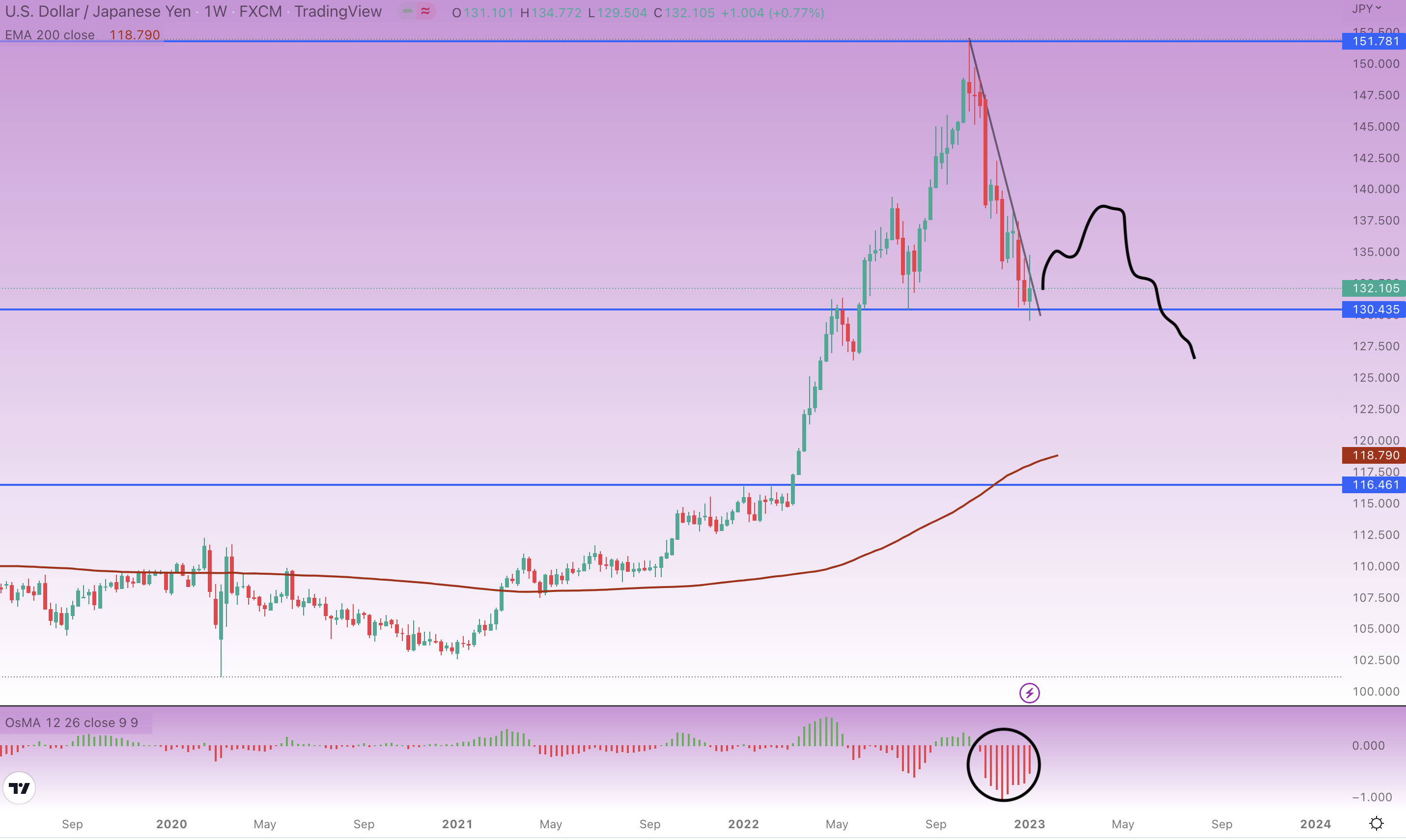 The OsMA indicator suggests the same as on the eurodollar – the US dollar is oversold and it might get strong again for a little while. However, it is very likely that the downtrend will then continue and the resistance at 151.78 will remain the peak. USD/JPY will probably create some formation like head & shoulders or 123 after which it will be reaching for new lows.

GBP/USD didn’t fall to parity (and is not going to?)

When the British pound showed it was clearly struggling against the US dollar, a lot of traders were betting it could soon reach parity. However, it was only a flash crash which stopped at 1.0364 and GBP/USD rose above 1.2000 quick.

Just like with other currency pairs, the US dollar seems to be too weak at the moment. Expect another movement downward, but don’t expect too much. The OsMA indicator points to a possible correction, but the ongoing bullish momentum is probably not over yet. GBP/USD could reach the trend line at 1.3000 in 2023. 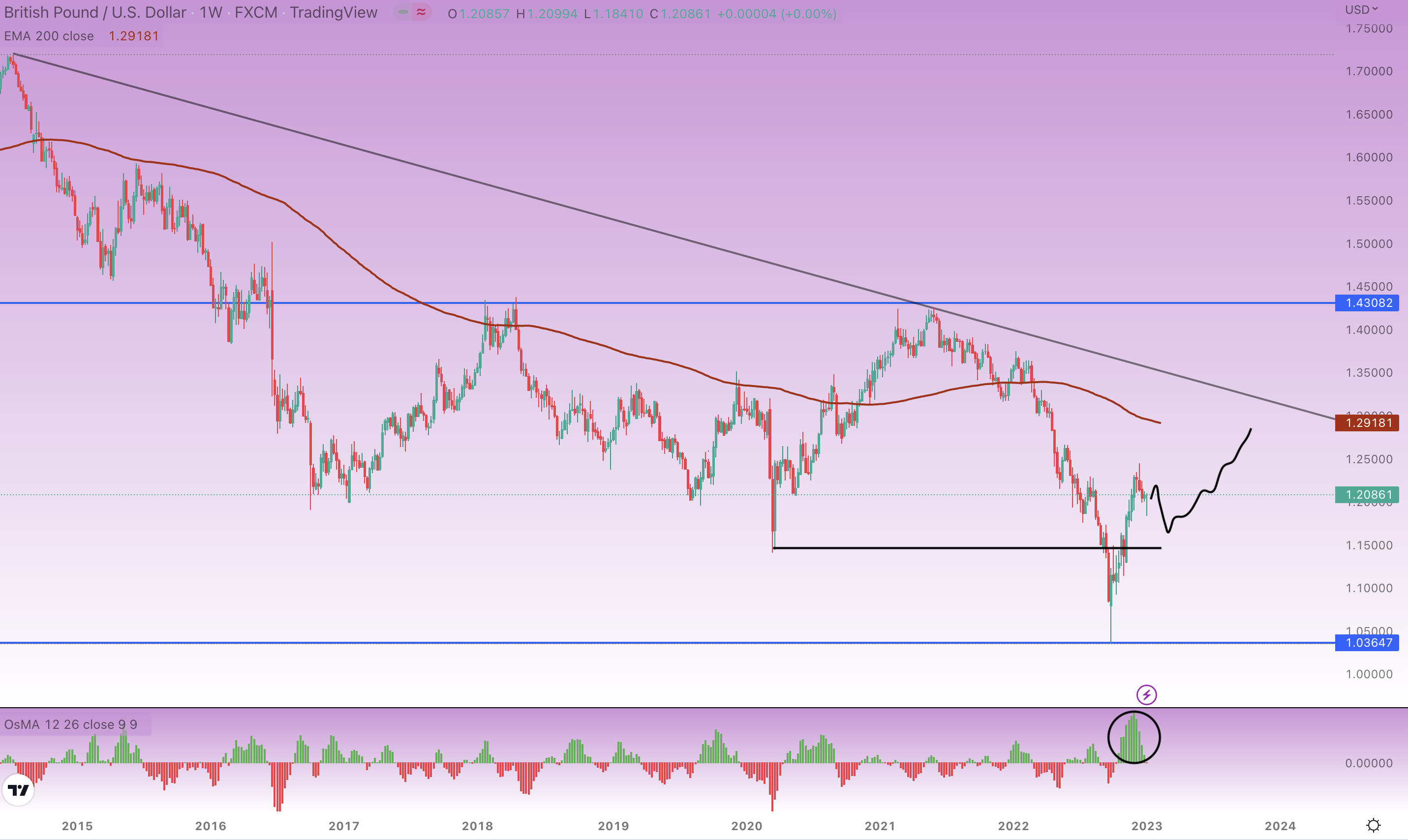 Be aware that the British pound is trending downward in the long run as you can see from the chart. It is very likely to continue down after it peaks near the trend line and shows signs of another possible decline.

USD/CAD may prefer a sideways market

This currency pair is mainly driven by the US dollar and the moves of oil, which is correlated to the Canadian dollar. After USD/CAD filled an important gap at around a price of 1.4000, a top has been formed. By the end of 2022, the currency pair even formed a lower high to confirm the peak.

Recently it pretty obviously declined to move above the 1.3679 resistance and is trending downward. A further downtrend is anticipated in the near future, but not too far. There are supports at 1.3200 and 1.297, a moving average (EMA200), and a trend line that could all stop the current downtrend. 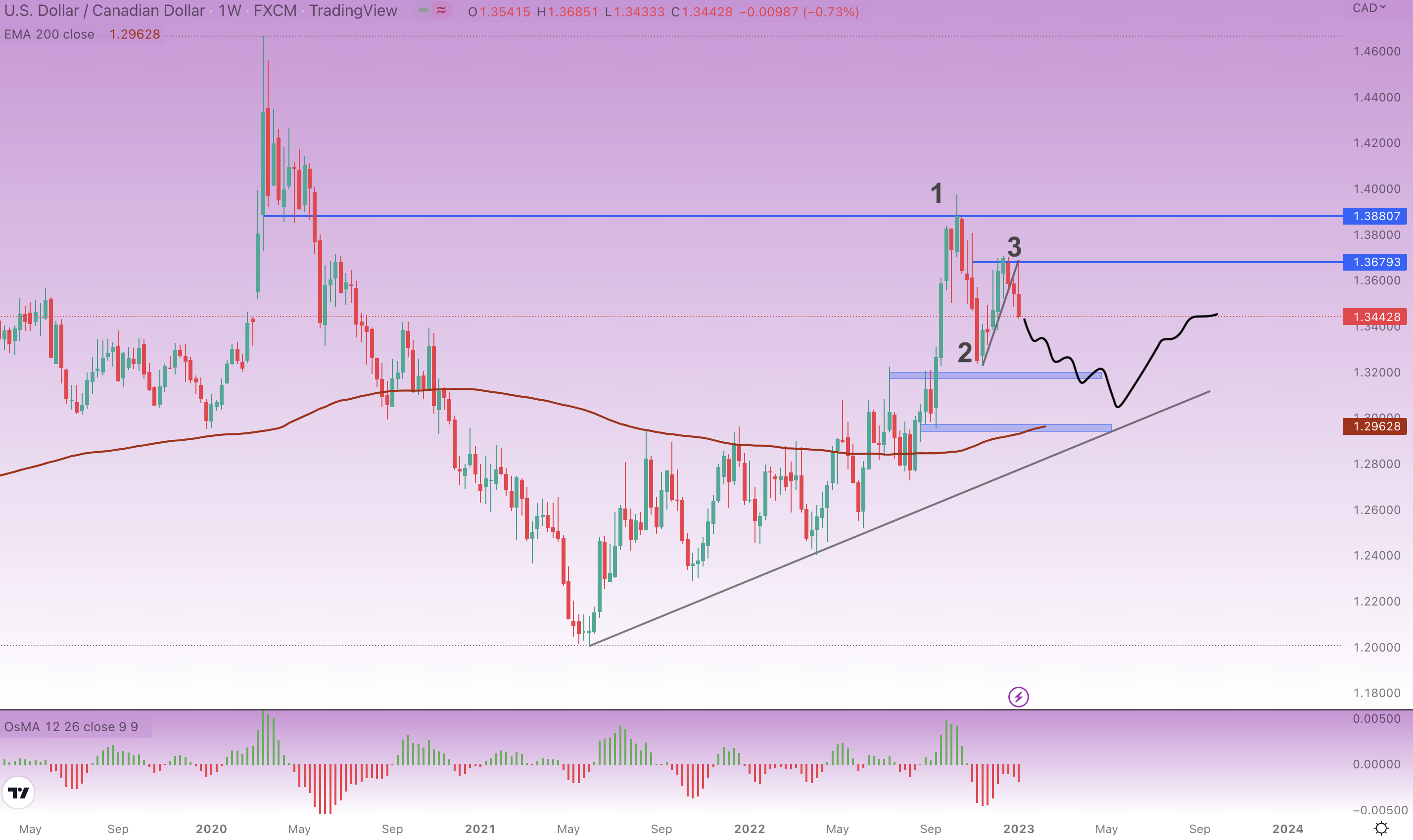 It is very likely to fall in that zone in the next few weeks, but it is poised to move up again because of the aforementioned signals, and a weaker oil. Oil prices peaked several months ago, indicating the commodity cycle is over. That is why oil could potentially drop even more, which would weaken the Canadian dollar.

This would result in an uptrend in USD/CAD if the US dollar gained strength. If the US dollar will be weak as well, this currency pair will most likely move sideways. But most importantly, if the trend line gets broken, USD/CAD could be headed to the support from early 2021. If it manages to bounce from the zone lower, it may get back up to 1.4000.

Don’t forget that this outlook can be influenced by many ongoing or upcoming fundamentals, so the direction might change in a single day. Of course, this outlook doesn’t serve as financial advice but more as an educational article.