The USD is trying to recover from this week's selling, with the Kiwi failing at the important 0.60 level.

It looks like the psychological barrier of 0.60 might pose some resistance for bulls as the kiwi traded 1% lower Wednesday, correcting previous gains.

US midterms in focus

The outcome of the midterm elections in the United States is still up in the air, with the Republicans moving closer to seizing control of the House of Representatives. However, several of the most contested contests are still up in the air, making the Senate battle appear too close to call at this moment.

“A Republican victory in one of the US chambers and consequent gridlock could pose a challenge to further fiscal stimulus and also raise the prospect of clashes over government funding deadlines and the US debt ceiling,” said analysts at HSBC in a note.

As China tries to manage its biggest COVID-19 outbreak since May, data indicated that China’s inflation was significantly lower than anticipated in October.

Given that China is a significant commercial center, a slowdown there is likewise a bad sign for other global markets.

This week, sentiment against China deteriorated further when officials said that Beijing has no intentions to relax its stringent zero-COVID policy, which is the leading cause of the country’s economic difficulties this year.

External imbalances are significant for New Zealand. Markets typically view this as more of a risk factor than a reason to sell the New Zealand dollar aggressively. Still, the fact that the deficit is expected to decrease over 2023 as international tourism recovers (from a near-zero base) does take away one of the negative factors that could affect the NZD.

Furthermore, the RBNZ is anticipated to raise rates by 75 basis points at its next two meetings. In contrast, the Fed is expected to moderate the pace of increases, giving the NZD room to recover some of its lost territory.

“One other string in the NZD’s bow is the gap between its current level and fair value, which we see at around 0.65. Our forecasts have this gap slowly closing over coming quarters, taking the NZD to fair value by the end of 2024.” FX analysts at ANZ said this week.

The NZD/USD pair will likely retest the short-term uptrend line, currently near 0.5880. If bulls fail to hold it, we might see a decline toward 0.5820 in the initial reaction.

You may also read: India increases oil imports from Iran and Russia

On the upside, the resistance could be at 0.5940 before retargeting the mentioned 0.60 threshold. 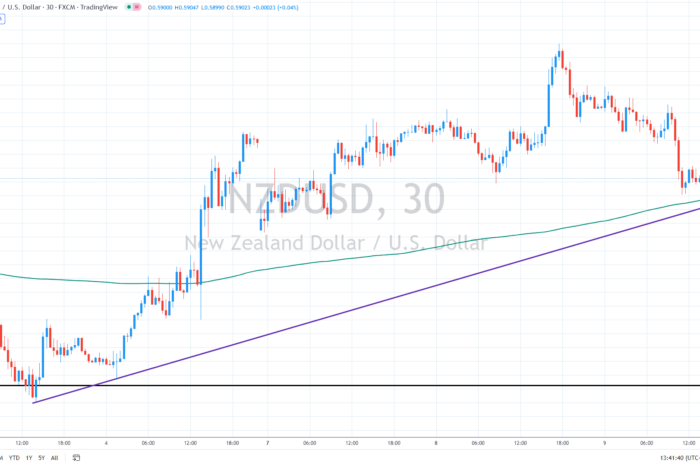