The British Pound traded 2% lower on Thursday, following a dovish BoE monetary policy decision and increasing demand for the USD.

The UK central bank made the widely anticipated decision to increase interest rates by 75 basis points, the largest increase since 1989. Furthermore, the BoE specified a lower terminal rate in the following policy statement than the 5.20% that is currently quoted in the markets. This led to new selling in the GBP/USD pair amid significant follow-through US Dollar purchasing, combined with a gloomy outlook for the UK economy.

The majority of the Monetary Policy Committee (MPC) believes that more bank rate rises may be necessary. MPC will act strongly as needed if the outlook implies increased inflation pressure.

Furthermore, the UK economy has very difficult prospects; financial conditions have considerably tightened since August. The BoE prediction, based on government fiscal policies up to Oct. 17, expects energy support to continue at about half the current scale for 18 months after April 2023, the central bank said.

“We maybe have the largest upside risk in inflation forecasts in MPC history. We do think the market curve is too high. Where the truth lies in between constant rate and market rate paths, we don’t predict,” Bank of England (BoE) Governor Andrew Bailey said after the decision.

To sum up, the main takeaways from today’s meeting were that the UK economy will probably experience a two-year recession and that rates will probably not rise as much as markets were anticipating.

UK Chancellor Jeremy Hunt spoke in response to the Bank of England’s (BoE) policy move, saying, “Today, the bank took action in keeping with their aim of restoring inflation to target.”

GBP/USD has dropped back below the broken bearish trend line, implying further weakness in the near future. The following support could be found near the 1.10 level and if not held, we might see another leg lower, targeting 1.08.

On the upside, if we see a bounce during the US session, the pair must jump above 1.1250 to cancel the immediate bearish pressure. 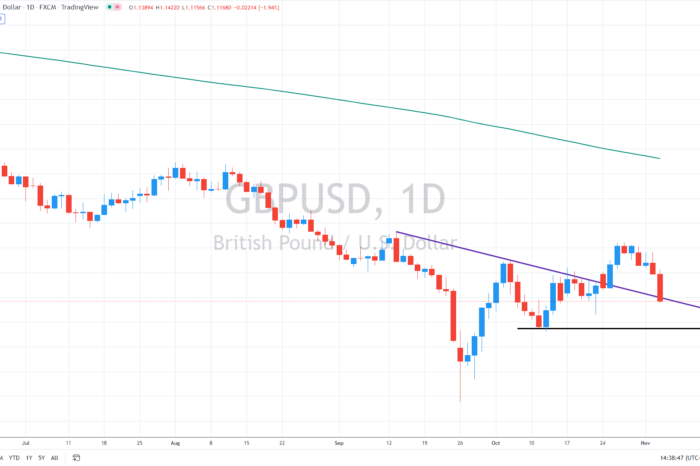