The Fed increased interest rates by 75 basis points, as expected, and suggested that the pace of future rate rises may slow down, sending stocks sharply lower.

Volatility has been extreme today, with the S&P 500 index rising sharply in the initial reaction to the Fed’s decision, only to drop circa 3.5% shortly after as investors digested Powell’s press conference.

Earlier today, the Fed increased interest rates by 75 basis points, as anticipated (Fed Funds are now at 4.00%, their highest level since December 2007, amid the most aggressive rate hikes since 1981).

Read more: This is how crypto “Uptober” actually went

Still, the central bank startled the market slightly by suggesting that the pace of future rate rises may slow down (due to the lagged effect of their cumulative monetary tightening).

Market players are referring to this as a “soft pivot,” but we see that although expectations for terminal rates have decreased (dovishly), expectations for rate cuts have also decreased (hawkishly), and the market is pricing higher rates for a longer period of time.

Following the news, stocks initially surged but lost steam and crashed sharply as Powell insisted it is “premature” to consider a halt on rate hikes in his post-meeting press conference, dismissing the concept of a policy pivot in the near future. The Fed still has a “far way to go,” according to Powell, who also predicted that “the final level of interest rates will be higher than previously forecast.”

Furthermore, Powell said that “If we don’t tighten enough, inflation could get entrenched. As we move now into restrictive territory, it will be appropriate to think more about lags.”

“The November FOMC meeting is not about the November policy rate decision,” Bank of America analysts led by Michael Gapen said in a recent note to clients. “Instead, the meeting is about future policy rate guidance and what to expect in December and beyond.”

You may also read: Why are soybean and wheat prices rising?

Additionally, according to the ADP’s national employment report, which acts as a shaky prelude to the government’s monthly jobs report going out on Friday, US private payrolls unexpectedly increased in October. The labor market is still tight, as per statistics released on Wednesday, despite the Fed’s attempts to restrain growth in its fight against inflation, indicating that aggressive rate rises may continue.

The recent upward trend has ended today, with the index falling back below the swing highs at 3,800 USD. Thus, rallies to that level could be met with further selling, targeting the short-term broken downtrend line at 3,710 USD or possibly June’s lows again near 3,640 USD. 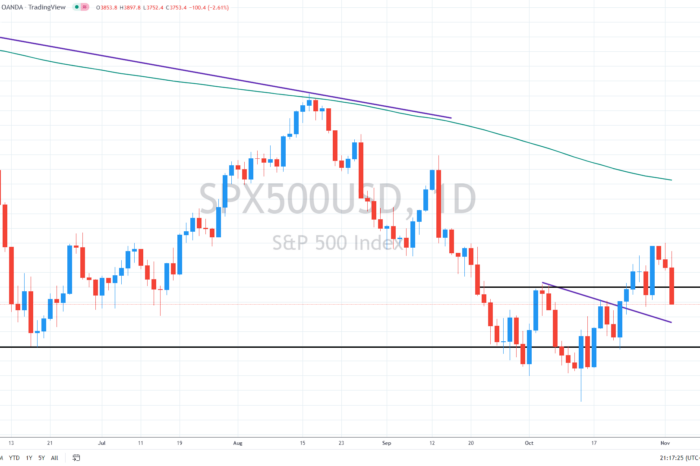