This week, the Pound has been under pressure as investors continue to fret about the incoming recession in the UK economy.

The Pound remained pressured as investors piled back into the greenback, pushing the GBP/USD pair toward 1.18, the lowest level in a month.

According to data issued by the Office for National Statistics, retail sales surprisingly increased in July, mainly due to online shopping.

Sales volumes decreased over the previous year but were 2.3% higher than in February 2020 before the coronavirus.

Helen Dickinson, chief executive of the British Retail Consortium, said: “The summer sunshine brought a slight uplift in sales. Summer clothing, air conditioning appliances, and outdoor foods all benefitted from record temperatures, but most retailers will still be seeing falling volumes in the face of rising inflation.

Additionally, the GfK consumer mood index dropped to a value of -44 in August from a reading of -41 in July, which was already the lowest rating recorded since the survey’s inception, as a result of the record levels of inflation in the country.

As inflation increased over 10% and concerns about a recession increased, consumer confidence reached new lows. When energy prices increase once more in October, the Bank of England anticipates inflation to hit over 13%, severely restricting discretionary expenditures for struggling households. 2022 is proving to be just as difficult for many people as the pandemic.

You may also read: Germany to cut VAT on natural gas from 19% to 7%

The GBP/USD pair is falling as a result of the Bank of England’s gloomy forecast, which warned that a protracted recession will begin in the fourth quarter.

Joe Staton, client strategy director at GfK, said: “These findings point to a sense of capitulation, of financial events moving far beyond the control of ordinary people. With headline after headline revealing record inflation eroding household buying power, the strain on the personal finances of many in the UK is alarming. Just making ends meet has become a nightmare, and the crisis of confidence will only worsen with the darkening days of autumn and the colder months of winter.”

The key support will be found in the 1.18 level, where July’s lows are. If the GBP falls below that support, large stop-losses will be hit, possibly sending the pair further lower, targeting 1.15 in the next leg lower. On the other hand, the pair must jump above 1.20 to stabilize from the short-term perspective. 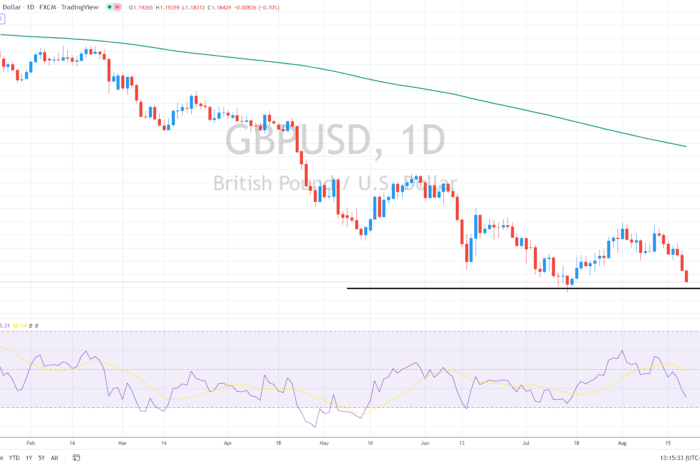