Sterling failed to continue in yesterday’s rally and wholly erased all Monday’s gains as investors sold the Pound following miserable PMI data from the UK. At the time of writing, the GBP/USD pair traded nearly 1% lower, hovering near 1.25.

According to the Office for National Statistics, government borrowing declined more than predicted in April but remained above pre-Covid levels.

Government borrowing decreased by 5.6 billion GBP to 18.6 billion GBP, falling short of analysts’ expectations of 18.8 billion GBP and the Office for Budget Responsibility’s prediction of 19.1 billion GBP. Nonetheless, it remained higher than pre-Covid levels, up 7.9 billion GBP from April 2019 and the fourth-highest April borrowing since monthly records started.

Paul Dales, chief UK economist at Capital Economics, said: “The lower-than-expected public borrowing and the downward revisions to borrowing in 2021/22 “will only add to the pressure on the Chancellor to go big when finalizing the imminent support package for households.”

In May, the seasonally adjusted SP Global/CIPS UK Manufacturing Purchasing Managers’ Index (PMI) fell to 54.6 from 55.1 predicted and 55.8 in April.

Meanwhile, the Preliminary UK Services Business Activity Index for May fell to 15-month lows, coming in at 51.8, down from 58.9 in April and 57.3 predicted.

“The UK PMI survey data signal a severe slowing in the rate of economic growth in May, with forward-looking indicators hinting that worse is to come. Meanwhile, the inflation picture has worsened as the rate of increase of companies’ costs hit yet another all-time high. The survey data point to the economy almost grinding to a halt as inflationary pressure rises to unprecedented levels.” Chris Williamson, Chief Business Economist at S&P Global, commented on the survey

US events in focus

Later today, new house sales in the United States are likely to fall again in April, owing to increased mortgage rates. Simultaneously, the Richmond Fed manufacturing index is on track.

So far, GBP/USD remains stuck between the critical short-term resistance at 1.26 and the support at 1.24. We need to see a clear break from this range to see some stronger momentum. 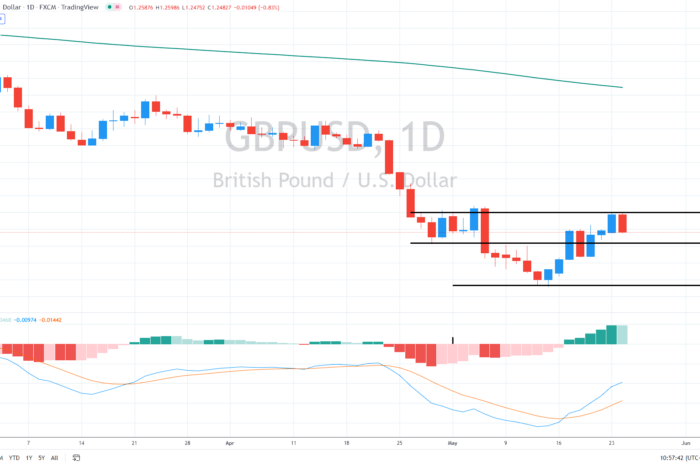