Could the euro break from its downward channel?

The single currency rocketed higher on Monday, buoyed by optimism from Ukraine’s offensive along with some hawkish comments by the ECB governors.

The ECB’s historical interest rate increase of 75 basis points at its event on September 8 seems to have given the pair more gains, and market speculation on Monday that interest rates in the area would rise to restrictive levels also gave the euro more traction.

Energy crisis in EU is far from over

In other news, according to Bruno Le Maire, the French Finance Minister, customers will have to foot a “little portion” of the rising cost of energy because the government cannot cover the entire rise.

You may also read: More help for Ukrainian grain exports?

He said that “despite higher expenditure to shield people from increasing inflation,” France’s public deficit target of 5% would be fulfilled the following year.

However, even if the ECB is able to persuade the markets that monetary policy is restrictive, the energy crisis continues to be a big drag on the euro. After all, the euro region is poorer because of rising energy prices.

“The energy crisis bears signs of a classic terms-of-trade shock in which euro area export prices must fall relative to import prices. In currency areas with flexible exchange rates, the necessary relative price adjustment takes place at least in part via the exchange rate. This means that as long as the energy crisis is not over, there are devaluation risks for the euro.” economists at Commerzbank expect the euro to remain under pressure.

As a result, the CME Group FedWatch Tool reveals that markets are pricing in a 75 basis point (bps) rate rise with a 90% likelihood.

The pair is now testing the upper line of the long-term bearish channel near 1.0150. If the euro closes above it, the long-term downtrend might be over, with a possible relief rally toward 1.0350. 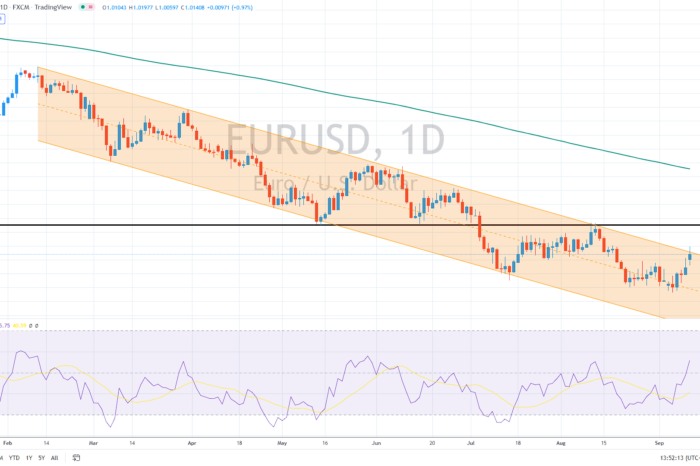