The single currency declined more than half a percent on Monday, falling toward the 1.02 level as sentiment worsened notably over the weekend.

According to recent data, the annual measure of inflation for the Eurozone surged beyond 10% at the end of September from 9.9%.

You may also read: Will trade conditions between Germany and China tighten?

Christine Lagarde, president of the European Central Bank, stated on Friday that in order to manage inflation at those uncomfortably high levels, interest rates will need to be raised to levels that limit economic growth.

Moreover, Joachim Nagel, the president of the German central bank and a policymaker for the European Central Bank (ECB), stated on Friday that the ECB policy rate is still in an expansionary zone and has to be moved into restrictive territory, according to Reuters.

This means the ECB will likely raise rates again in December, marking the fourth straight increase. The ECB has increased rates by 200 basis points since July.

Elsewhere, a record increase in new COVID-19 cases was seen in numerous Chinese cities. In addition, due to increasing infections, new lockdowns were implemented in major financial centers, including the capital Beijing and the industrial hub Shanghai. The new policies sparked widespread worries that the nation’s economy, which had briefly recovered in the third quarter, would once more slow to a halt.

The world’s second-largest economy was already experiencing difficulties in October, according to data released this week, signaling further challenges in the months to come as anti-COVID efforts ratchet up.

Technically speaking, the EUR/USD pair touched the 200-day moving average during the last week, but so far, bears have defended that level.

As a result, as long as the euro trades below the 200DMA (currently near 1.04) and the strong resistance of 1.0350, the immediate outlook seems bearish.

Read more: Are metals ready to extend their rally?

Bears could target the 1.01 level in the following hours or days.

On the other hand, if sentiment improves again and the euro jumps above the mentioned resistances, we could see a sharp rally toward last week’s highs near 1.05. If the euro closes above 1.04 on a daily basis, it might be a significant bullish signal. 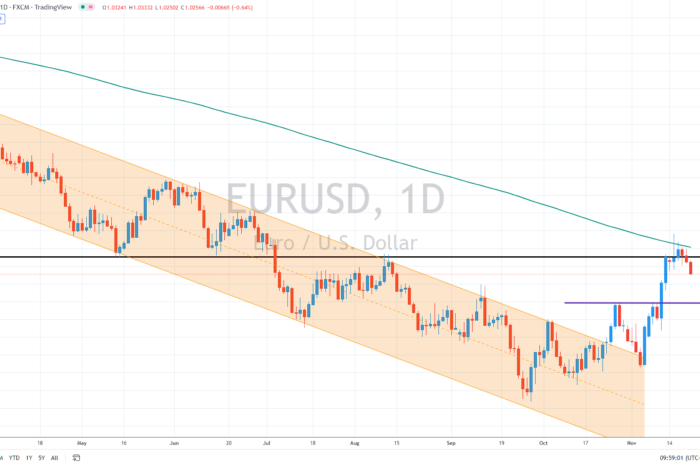