The single currency moved higher against the US dollar on Monday as investors are taking profits from the recent USD rally amid softening Fed tightening expectations.

As of writing, the EUR/USD pair traded near 1.0250, some 0.3% higher on the day, ignoring today’s catastrophic German macro numbers.

German economy is on its knees

According to official data issued by Destatis on Monday, Germany’s retail sales decreased by -1.6% monthly in June, compared to a 0.2% projected decline and a 0.6% decline in the previous month.

Retail Sales for the bloc on an annualized basis came in at -8.8% in June as opposed to -8.0% anticipated and -3.6% booked in May. It was the lowest reading of German retail sales since the statistics began in 1994.

Moreover, the Manufacturing PMI in the euro area remained in the contraction range at 49.8, while the June unemployment rate remained unchanged at 6.6%.

You may also read: Weekly macro report – What did the Fed cause?

The manufacturing industry will also take center stage in the North American session with the announcements of the final S&P Global Manufacturing PMI and the more pertinent ISM Manufacturing, both of which will be followed by June’s Construction Spending data.

Elsewhere, important assessments of the Chinese industrial sector that were issued overnight highlighted the short-term difficulties that the world economy was facing.

In keeping with a fall noted in the “official” PMI that was issued over the weekend, survey developer Caixin reported a decline in its China Purchasing Managers’ Index for manufacturing for the month of July from a value of 51.7 for June to 50.4 (consensus: 51.5).

“This marks the start of the H2 weakness we expected, as the data normalizes after waves of disruption tied to the Omicron wave and related restrictions,” said Craig Botham, China+ economist at Pantheon Macroeconomics.

The pair remains within a sizeable bearish channel. However, the euro has failed to post new lows recently, likely indicating that a trend reversal could occur soon. The next resistance is near 1.0250, where the recent swing highs are seen. If the single currency clears that level, we might see a rally toward the upper line of the channel near 1.04.

Alternatively, the EUR/USD pair must drop below 1.01 to start bearish momentum, with the next target at parity. However, this scenario seems rather unlikely, judging from the recent market conditions. 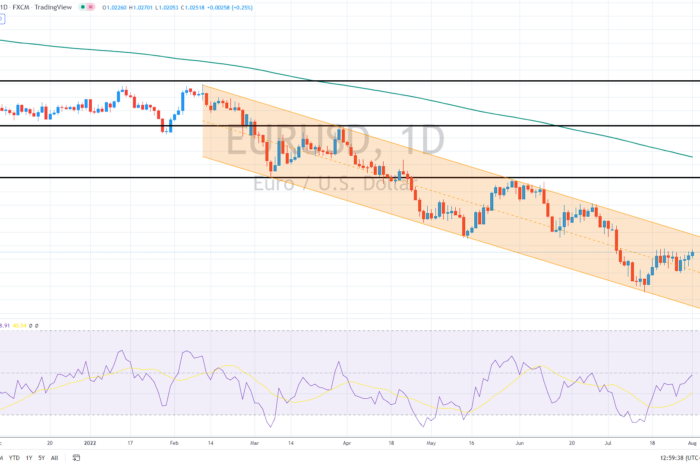