Bears have been trying to push the single currency below the critical 0.87 level, so far unsuccessfully, as dip-buying remains solid at that level.

Following a 1.5% decline in September (which was corrected from an early estimate of 1.4%), when stores and companies were closed for Queen Elizabeth II’s state funeral, sales increased by 0.6% in October. Analysts had anticipated a gain of around 0.5%.

With the exception of food shops, where volumes decreased by 1%, or 4.1%, as compared to pre-Covid levels in February 2020, increases were observed across all of the major industries.

Industry data is increasingly demonstrating that customers are moving to less expensive brands and making smaller purchases when they go shopping on a weekly basis as a result of inflation and cost-of-living problems.

Sales were down 6.1% year over year, somewhat better than the 6.5% decline predicted, while retail sales decreased 2.4% year over year in the three months ending in October.

Darren Morgan, ONS director of economic statistics, said: “Looking at the broader picture, retail sales continue their downward trend seen since summer 2021 and are below where they were pre-pandemic.”

In the EU, European Central Bank (ECB) President Christine Lagarde said that they expect to raise rates further to the levels needed to ensure that inflation returns to our 2% medium-term target in a timely manner.

Moreover, the risk of a recession has increased, but a recession is unlikely to bring down inflation significantly.

“Recession in Europe means that the euro could underperform for most of the year, where fears of another energy crisis in the winter of 2023 and uncertainty in Ukraine will hold the euro back,” analysts at ING think.

You may also read: UK raises windfall tax on energy companies to 35%

The Conference Bureau Leading Index, Existing Home Sales, and Boston Fed President Susan Collins’ speech will all take center stage on the US agenda in the absence of any reports from the eurozone.

It looks like the euro-sterling cross has defended the key short-term support in 0.87 as it had tested it several times recently. So as long as the price stays above that level, the outlook could favor further upside, targeting 0.8770.

On the other hand, if the mentioned support is broken down, larger stop-losses could be hit, possibly ending the bullish outlook and sending the price toward 0.86. 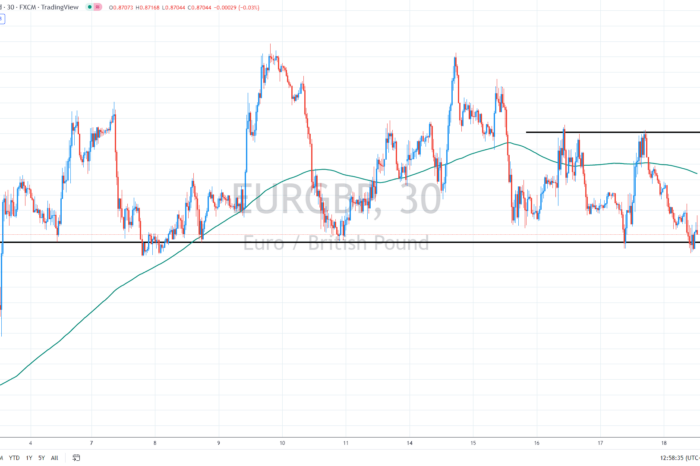