It looks like today's trading will be in a risk-off regime as China reported another record in COVID cases.

The AUD/JPY cross traded half a percent lower during the London session, erasing earlier gains as sentiment deteriorated today, prompting investors to take profits from the recent rally.

The Australian dollar recently surged against the USD (and rose against the JPY) in a relief rally after the latest US CPI print.

Despite this, Australia’s employment change increased by 32,200 compared to market expectations for a rise of 15,000 and 900, while the unemployment rate decreased to 3.4% from earlier readings of 3.5% and 3.6%.

This week, China’s daily COVID count increased at its quickest rate in seven months, leading the authorities to impose more restrictions in important financial centers. The Chinese economy was once again having trouble as a result of increased lockdown measures, as seen by weak retail sales and industrial figures that were announced earlier this week.

China is likely to conduct further lockdowns to stop the spread of viruses, which will significantly outweigh excitement about the nation loosening certain quarantine and mobility restrictions last week.

In Japan, statistics show that the nation’s trade deficit rose more than anticipated in October. This was caused by a more than 50% increase in imports as the price of importing gasoline and food increased due to a badly depreciated yen.

Hiroshi Nakaso, a former deputy governor of the Bank of Japan, suggested on Thursday that the central bank should think about reversing its ultra-loose monetary policy, which has hurt the yen this year.

On the other hand, BoJ Governor Haruhiko Kuroda said earlier in the day that it is important to sustain monetary easing to boost the economy. At the same time, Senior BoJ Executive Director Shinichi Uchida stated that it is too early to talk about ending monetary stimulus.

October Housing Starts, Building Permits, and the weekly Initial Jobless Claims will all be on the US economic calendar in the second part of the day. Also, giving talks will be a number of FOMC policymakers.

You may also read: Fed has started its 12-week test of digital dollar

The short-term strong support near 93.50 – 93.60 has been broken to the downside, changing the outlook to bearish as long as the Aussie trades below that level. Bears could target last week’s lows in the 93 region.

On the upside, should the Aussie jump back above the mentioned resistance, we might see a rally toward today’s highs near 94.00. 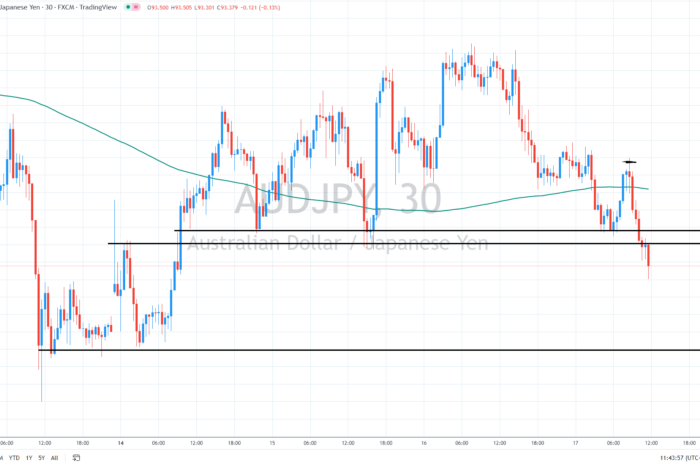