The USD/JPY pair rose in tandem with the other USD pairs on Tuesday as sentiment worsened in the markets, benefiting the safe haven US dollar.

As of writing, the greenback traded slightly higher on the day, trying to get above the 145 threshold, where the BoJ intervened last week.

First Drop In Home Prices Since 2012

The 20-City Composite index fell 0.44% MoM, far below the 0.20% expected increase, and sharply declined from the downwardly revised 0.19% increase in July. More importantly, this was the first sequential decline in home prices tracked by Case-Shiller since March 2012, or ten and a half years ago. Analysts had anticipated Case-Shiller Home Price growth to continue its modest deceleration in August (the latest available data in this heavily lagged and smoothed data set).

Home prices increased at 16.06% year over year, below predictions of a 17.1% gain and falling short of July’s YoY growth of 18.66%. In August, the overall national average price index increased 15.77% year over year.

Comments supported the idea that the atmosphere is gloomy and becoming worse by the hour: Although US house prices are still much higher than they were a year ago, July’s data shows a sharp slowdown, according to Craig J. Lazzara, Managing Director at S&P DJI.

“For example, while the National Composite Index rose by 15.8% in the 12 months ended July 2022, its year-over-year price rise in June was 18.1%. The -2.3% difference between those two monthly rates of gain is the most considerable deceleration in the index’s history,” Lazzara added.

In other news, Charles Evans, president of the Chicago Fed, stated earlier in the day that the central bank will need to increase interest rates this year by at least one more percentage point.

US data above expectations

Earlier in the day, US durable goods orders declined -by 0.2% month-over-month, slightly exceeding expectations. However, on a year-over-year basis, growth rebounded back to double digits, rising 11.2% after July’s 9.2%.

Better news came from the value of Capital Goods New Orders Nondefense Ex Aircraft & Parts, a proxy for capital spending, which increased a robust 1.3% following a 0.7% rise that had been upwardly revised; it exceeded the 0.2% projection.

Durable goods validate a robust economy, indicating the Fed will maintain its aggressive stance. To that end, remember that all of this data is nominal and has not been corrected for inflation.

From the technical point of view, should the pair jump above 145, we might see another rally toward the current cycle highs at 146, likely prompting the BoJ to intervene again (although how effectively, that remains to be seen). 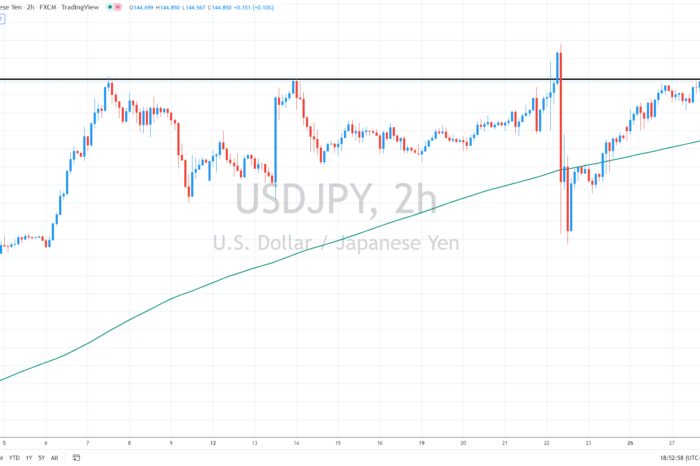