A cautious uptrend is still seen in the USD/JPY pair, despite fears of another BoJ intervention.

The USD/JPY maintained its bullish momentum on Monday, trying to jump above the 145 level despite the overall USD weakness.

Shunichi Suzuki, the finance minister for Japan, stated on Monday that the government is prepared to intervene in currency markets to stop more losses to the national currency. This, coupled with the general market sentiment of caution, provided some support to the safe-haven Japanese yen and limited the upward movement for the USD/JPY pair.

According to Ministry of Finance figures released on Friday, Japan used up to a record amount of money ($19.7 billion) last week to intervene in the foreign currency market to support the yen, using up over 15% of the country’s easily accessible intervention funds.

As per the summary of opinions from the Bank of Japan’s September meeting, Japan’s core consumer inflation is anticipated to pick up speed toward the end of the year before slowing down significantly after that.

Key takeaways from the opinions>

The Bank of Japan and other major central banks’ distinct stances on monetary policy may continue to put pressure on the JPY. The BoJ has lagged behind other significant central banks in the process of policy normalization and has remained dedicated to continuing its monetary easing.

In contrast, it is anticipated that the US central bank would continue its aggressive course of policy tightening to combat excessive inflation. In reality, the markets have already factored in the chance of another massive 75 bps Fed rate rise in November. The rates on US bonds, as well as the dollar, are thus likely to benefit from this.

The US economic agenda will include the ISM September Manufacturing PMI later in the day. A number of FOMC policymakers will speak in the afternoon, including John Williams of the New York Fed and Esther George of the Kansas City Fed.

If the resistance near 145 is broken to the upside, we could see a quick rally toward the pre-intervention highs at 146. However, bulls need to be very careful as the BoJ might step in at any moment and start selling the pair again. 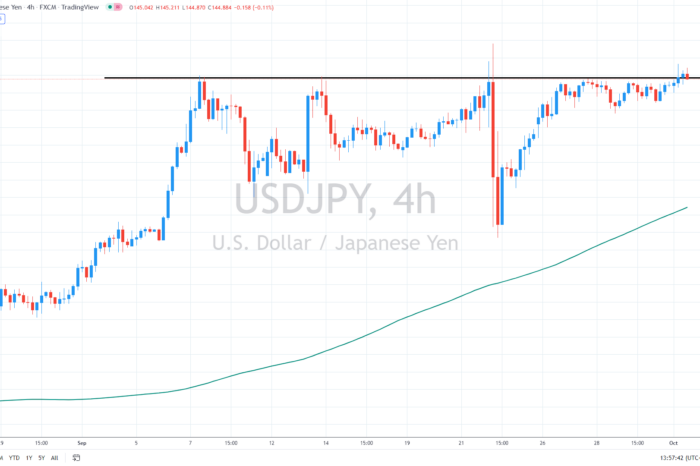