It looks like the negative sentiment from the beginning of the week is gone and bulls jumped back into the market.

German DAX index has completely erased this week’s losses and turned positive on the weekly basis, posting a significant weekly pin bar. That is usually a reversal formation, pointing to further gains over the next days.

According to figures released by Germany’s Destatis on Friday, the German economy increased by 3.7% year over year in the first quarter of 2022 (calendar-adjusted). This figure was somewhat higher than the market’s forecast of 3.6%, and it followed a 1.8% increase in the previous quarter. The GDP increased by 0.2% on a quarterly basis, contrary to economists’ expectations of 0.1 percent.

In the meantime, anticipation that the ECB would hike rates in June/July should bolster occasional strength in the single currency, while higher German yields, higher inflation, and a reasonable pace of economic recovery in the area are also supportive of a better mood surrounding the DAX index.

April has been dominated by concerns about the US economy, as well as China’s — which is seeing an increase in COVID-19 cases — and Russia’s ongoing war in Ukraine. So far in April, global stocks have dropped 5.8%, their worst month since March 2020.

“The petrified tail-chasing we have seen this week as equity markets swing from ‘we’re all doomed, get me out,’ to ‘I don’t want to miss the absolute bottom of the stock market, get me in’ is perhaps indicative of the state of confusion out there.”

European GDP data are coming later today, and are projected to grow marginally year over year. In addition, the euro zone’s HICP inflation indexes are on track, with investors forecasting more increases in inflation based on this gauge.

Considering the massive weekly pin bar, the next days could bring further upside for the DAX index. Additionally, the MACD indicator is at extreme negative levels on the weekly charts, suggesting a short-covering rally could begin anytime soon.

The next target for bulls could be in the 14,600 EUR zone and if not broken to the upside, the index might advance further toward the psychological zone of 15,000 EUR.

On the other hand, the pin bar formation might become invalid if DAX drops below 14,000 EUR. 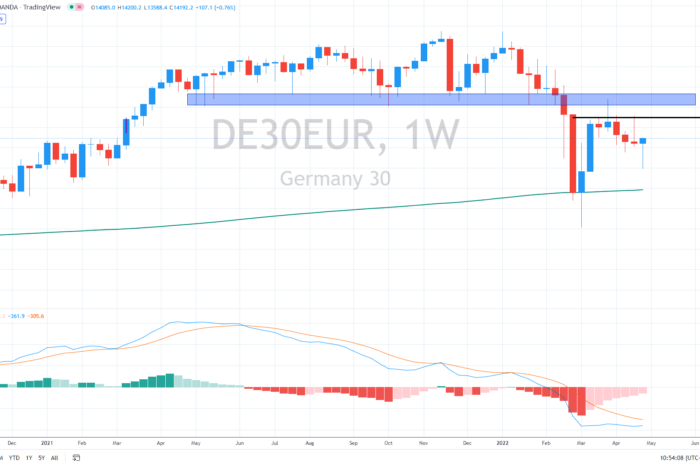 SAS had to file for bankruptcy protection in order to reduce its debts and restructure. This was after a strike by more than 1,000 pilots.
2 min

German gas giant Uniper SE is reportedly in talks with the government over a possible rescue package of up to 9 billion euros ($9.4 billion).
8 min

In our latest macro report, we remain positively aimed at bonds with long-term maturities, while giving updates in the US and EA policies.
See more