S&P 500 skyrockets after US inflation moderates

Inflation in the US, as determined by the Consumer Price Index (CPI), decreased to 7.7% on an annual basis in October from 8% in September, according to a report released on Thursday by the US Bureau of Labor Statistics. However, this figure was less than the 8% market expectation.

You may also read: Disney craters after horrible earnings

In contrast to experts’ estimates of 6.5%, the Core CPI, which does not include volatile food and energy costs, decreased from 6.6% to 6.3% on an annual basis.

The CPI and the Core CPI were 0.4% and 0.3%, respectively, for the month, falling short of forecasts made by experts in both cases.

While October’s statistics demonstrated that inflationary pressures remained high, there were some indications that prices were beginning to decline. Over the course of the month, the indices for clothes, medical treatment, used cars and trucks, and airline rates all fell. Over half of the monthly increase in all categories came from shelter inflation, which makes up nearly a third of the basket for consumer price inflation. Additionally, the cost of food and gasoline increased.

Investors ignored Chair Jerome Powell’s claim made earlier this month that a policy change is not imminent as moderate data once more spurred expectations that the Federal Reserve may slow the pace of its monetary tightening drive.

According to Reuters, San Francisco Fed President Mary Daly observed that the October Consumer Price Index (CPI) report was positive news but warned that only one month’s worth of data should not be used to declare triumph.

Furthermore, Dallas Federal Reserve President Lorie Logan stated that while the October CPI inflation data is a great respite, there is still a long way to go.

Both governors admitted that it might be appropriate to lessen the pace of the rate hikes, implying a 50 bps increase at the Fed’s next meeting in December.

“It likely will be a number of months yet until the FOMC feels confident that inflation is indeed receding back toward its target of 2%. In short, we expect that the Fed policymakers will remain biased toward over-tightening rather than under-tightening for the foreseeable future.” analysts at Wells Fargo said after the data.

The next resistance could be found at last week’s highs near 3,915 USD, and if broken to the upside, we could see a rally toward the psychological level of 4,000 USD, or possibly the test of the 200-day moving average near 4,050 USD. 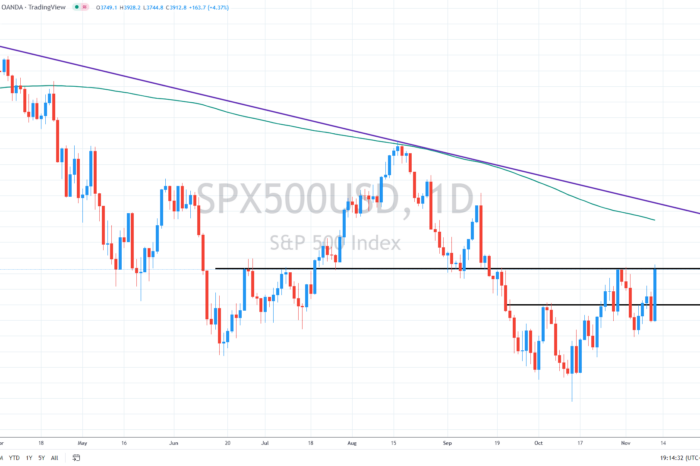