This week has been a bit lighter in economic news, but investors are still waiting for the Fed's decision on 75bps and the FOMC debate.

Once again establishing the Fed pivot narrative, WSJ Fed whisperer Nick Timiraos wrote this morning that while 75bps is a done deal for the November meeting, the FOMC debate will serve as an “essential staging ground” for a potential move down to 50bps in December.

Timiraos argues that some Fed officials want to talk about lowering the pace of rate rises (to 50bps in December from 75bps expected) without causing a stock market rally (and the subsequent easing of financial conditions). Therefore, Timiraos’ article is a strawman that aims to elicit first emotions and establish the thesis that 50bps is still a sizable increase.

On the other hand, the Minneapolis Fed President Neel Kashkari, said Tuesday: “The problem for me with trying to say, ‘Hey, it’s time to pause,’ is we’re not even sure that we’ve got rates high enough to push services inflation down.”

October brings some relief (so far)

Equities are expected to conclude the week higher despite the last two down days after a surge on Monday and Tuesday boosted all three main averages and helped the S&P 500 post a 4% gain before the index lost steam. After losing 9.3% in September, the S&P 500 was up 3.1% for the month of October as of Thursday’s closing, providing investors with some relief.

According to Liz Young, Head of Investment Strategy at SoFi, “we’re closer to the finish than we are to the beginning, and the more bear market rallies we witness, the fewer there are left until we eventually flush it all out.”

As per Yahoo Finance, the third-quarter earnings season has so far performed better than many experts had anticipated, with huge failures from brands like Snap (SNAP), which fell 31% Friday after disappointing Wall Street with its results, countering beats from businesses like Netflix (NFLX), AT&T (T), and IBM (IBM).

So far, the chart remains in a corrective structure but trying to post higher highs and higher lows – an indication of a short-term uptrend.

The next resistance is seen near the short-term bearish trend line at around 3,720 USD, which should be the primary target for bulls today. 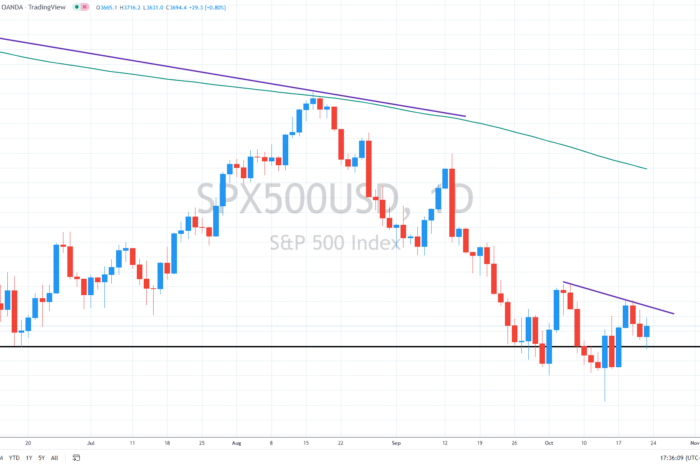