It looks like Apple could soon start another massive rally.

The Apple stock price declined on Wednesday as reports spread that the tech giant is cutting the production of its newest iPhone model.

According to two insiders in Apple’s supply chain, the Information claims to have been the first to reveal that Apple has reduced the production of its iPhone 14 Plus model.

While its procurement team reevaluated demand for the device, Apple has instructed at least one Chinese manufacturer to immediately stop producing components for the iPhone 14 Plus.

Furthermore, two Apple downstream suppliers in China who use the components and put them together into bigger modules also decreased their output by 70% and 90%, respectively.

The changes come as the global economy is weakening and inflation is increasing, which has reduced consumer spending. Due to the $100 price difference between the iPhone 14 Plus and iPhone 14 Pro, some customers have chosen the more costly and feature-rich model instead.

Moreover, Bloomberg reports that the global smartphone industry experienced its worst third quarter since 2014 as a result of customers delaying discretionary purchases like personal gadgets due to the weak economy.

According to market research company Canalys, global smartphone shipments decreased 9% in the three months that ended in September, continuing a downturn that has lasted the entire year 2022. According to Canalys, the demand trend will probably continue to decline for a further nine months.

“Going into the sales season, consumers who have been delaying purchases will expect steep discounts and bundling promotions as well as significant price reductions,” Canalys analyst Sanyam Chaurasia said. “Compared to the strong demand period of the previous year, a slow but steady festive sale is anticipated” in the fourth quarter.

When Apple releases its financial results on October 27, we will soon know how this will affect the company.

Recent statistics and the wait for the more expensive models have kept Wall Street upbeat. Credit Suisse upgraded its forecasts for revenue and EPS by 1% and stated that it expects ongoing momentum in the higher-end model to help. However, Credit Suisse did cut its projections for 2023 and 2024 as a result of declining consumer demand.

The company anticipates sales of $88.83 billion and earnings per share of $1.27.

The stock remains capped by the massive bearish trend line. On the plus side, if the price jumps above that line, the trend could change to bullish, implying a possible rally, such as the one which took place in July – August.

You may also read: GBP/USD stumbles after UK inflation data

On the downside, the support is seen near 140 USD, followed by another demand zone at around 138 USD and 135 USD. 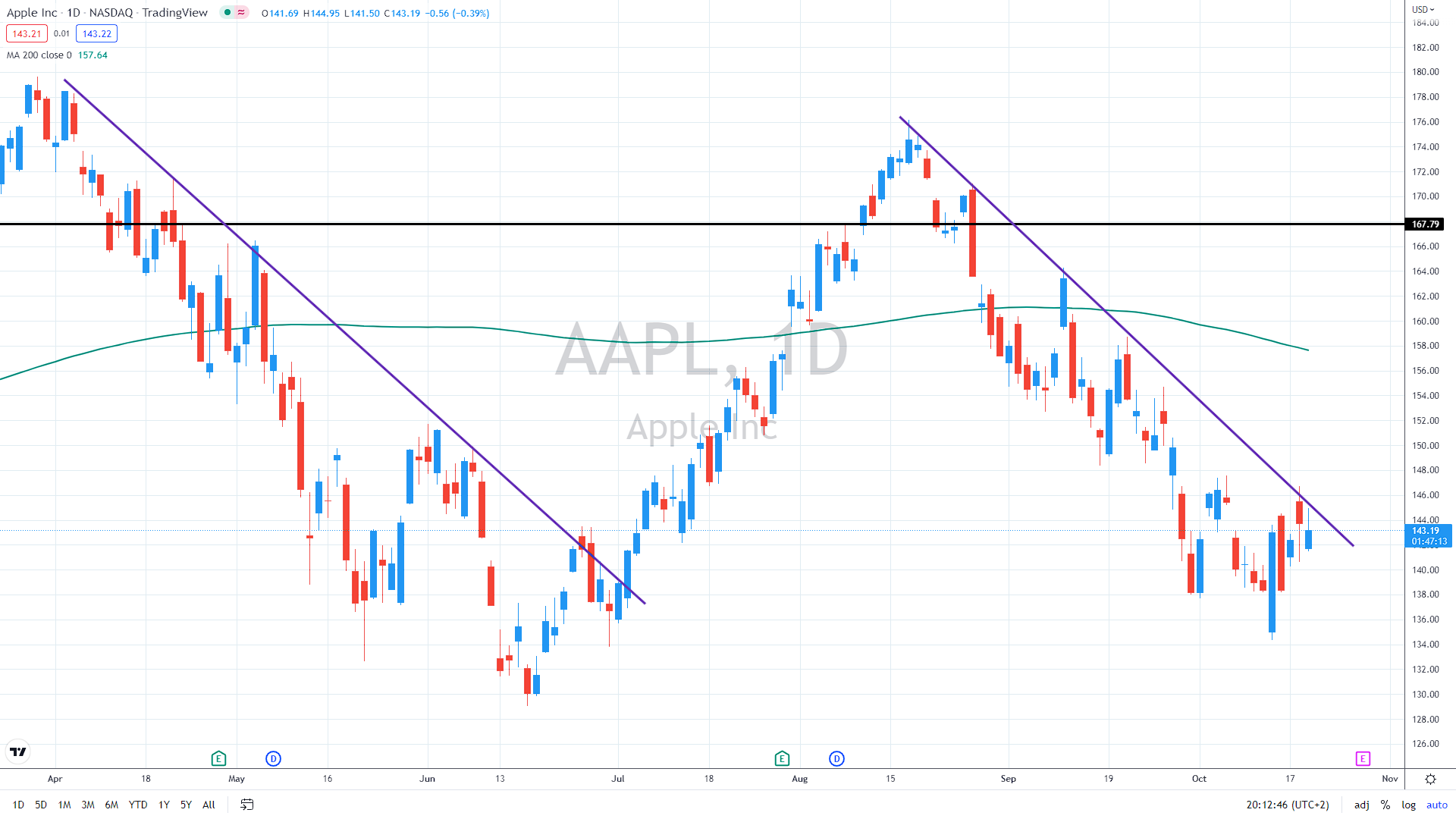