This week will be dominated by the midterm elections in the United States, as well as the release of the October inflation figures.

The tech-heavy Nasdaq 100 index quickly erased today’s 1.6% gain and traded marginally weaker ahead of the US closing bell as investors remain nervous due to several key factors.

Midterms’s results will be known soon

The outcome of Tuesday’s midterm elections, which will determine which party controls the House and Senate for the duration of President Joe Biden’s first term, is investors’ primary concern. In the past, Wall Street has favored a divided Congress or White House with political deadlock that may thwart significant policy changes, a situation that investors view as advantageous for stocks.

In the most recent client poll conducted by JPMorgan, 39% of participants were undecided about whether the upcoming midterm elections in the United States will be a catalyst for the risk markets or a non-event, while 21% anticipated negative repercussions. No matter who wins, according to some experts, midterm results only have a “minimal” impact on the financial markets.

On the other hand, according to Deutsche Bank, one of the finest historical buy indications for stocks is around the midterm elections. In fact, the S&P 500 has consistently increased a year following the vote in the 19 midterm elections held since WWII. Although it is debatable if any of those cycles had to deal with the macro tsunami that will hit over the next 12 months, it demonstrates the technicals at play.

All eyes on inflation again

The Thursday announcement of the October inflation figures will be another topic that will be widely studied this week. Bloomberg’s survey of economists predicts that the headline CPI would increase at an annual pace of 7.9%, down from 8.2% the previous month. Core CPI is much over the Fed’s tolerance level, even though the data indicates that the pace of inflation is beginning to decline.

”A below consensus print is likely to help push the pricing for the terminal funds’ rate modestly lower, likely bull steepening the curve in the process,” analysts at TD Securities argued.

According to the market, a 50 basis points increase is thus entirely priced in for the December meeting, with a 30% chance of a greater 75 bps increase. The swaps market is still pricing a terminal rate of around 5.25%.

Also read: LBRY plunges after losing to SEC – is Ripple next?

The index dropped below the short-term uptrend line, canceling the immediate uptrend. The next downward target could be at 10,900 USD, or possibly the 10,825 USD support.

On the upside, the resistance now stands near 11,030 USD. 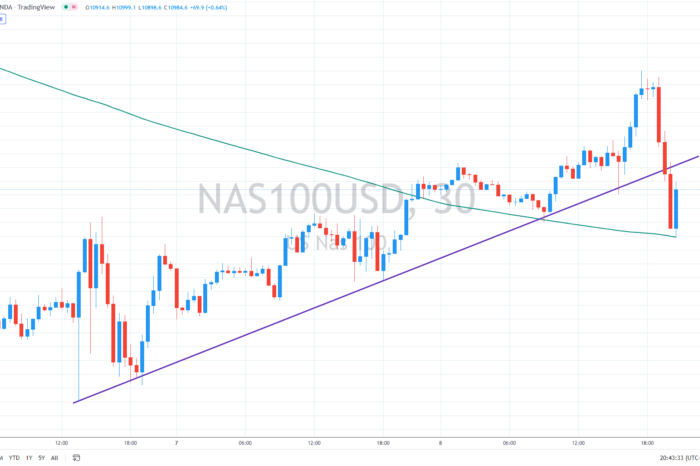