The so-called Cable traded slightly higher during the London session, trying to stay above the 1.21 threshold, despite evident risk-off trading in other markets.

The final revision released by the Office for National Statistics (ONS) on Thursday revealed that the UK economy grew by 0.8% quarterly in the first three months of 2022, confirming the 0.8% growth indicated in the first readout and meeting predictions of 0.8%.

According to the yearly data, the UK’s GDP increased by 8.7% in Q1 compared to 8.7% in the previous quarter and 8.7% predicted.

BoE is in a tough position

The mood around the Bank of England and the Northern Ireland protocol noise are important aspects of the prognosis for sterling in the foreseeable future. After raising interest rates by 25 basis points at its most recent meeting, the Bank of England is anticipated to continue its tightening cycle to control inflation.

According to Governor Andrew Bailey, who spoke on Wednesday, the BoE has the ability to address inflation more strongly if necessary.

“There will be circumstances in which we will have to do more,” he said. “We’re not there yet in terms of the next meeting. But that’s on the table. But you shouldn’t assume it’s the only thing on the table.”

With inflation at the top of charts of major economies and growth projections from organizations like the OECD are at the bottom of those large economies, the UK is facing acute monetary policy issues.

The GBP/USD pair may fall to test the 1.120 level, according to Westpac economists.

“GBP/USD rebounds have been limited and it remains vulnerable to flushing below 1.20,” they concluded.

Along with personal spending and income statistics, today’s schedule includes the customary Thursday’s US unemployment claims. There will also be a publication of the June Chicago PMI, which is expected to slightly fall.

As long as GBP/USD trades below its May lows of 1.21650, the immediate outlook seems bearish, targeting the current cycle lows at 1.20. As previously said, the medium-term outlook favors selling any rallies with a target below 1.20. 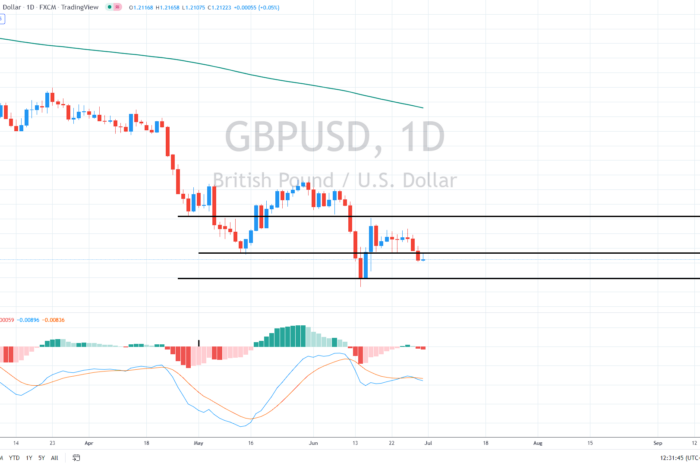