The Pound has managed to capitalize on USD weakness today, rising more than 0.5% ahead of the US session and changing hands near 1.19 as investors continue selling small rallies in the greenback.

Bloomberg reported on Tuesday that UK Finance Minister Jeremy Hunt is alleged to have secretly pushed for Britain to have tighter connections with the European Union (EU), citing several government sources. This is the first indication of the UK PM Rishi Sunak camp’s displeasure with Hunt.

The UK will not pursue any “Swiss-style arrangements” with the European Union, prime minister Rishi Sunak stated earlier on the political front.

Let me be clear about this, the prime minister said to business leaders at the CBI convention in Birmingham. “Under my direction, the UK won’t pursue any links with Europe that depend on adherence to EU regulations,”

“I voted in favor of Brexit because I support it. I am aware that Brexit may and is already providing the nation with significant advantages and prospects.”

His remarks appeared to explicitly refute weekend allegations that top government officials favored deeper, Swiss-style economic links between the UK and the EU.

Despite not being an EU member, Switzerland enjoys access to the single market thanks to a number of bilateral agreements that also allow for more open immigration and financial contributions to the EU.

Ministers in the UK government refuted the report, but a Downing Street source who wished to remain anonymous told the Sunday Times that there was “certainly a deal to be done.”

Sunak previously rebuffed CBI proposals to relax immigration restrictions in order to address the labor shortfall, claiming that the government was instead concentrating on stopping illegal immigration.

In other news, in light of the gloomy UK economic outlook and the more dovish stance of the Bank of England, Wells Fargo economists expect the British pound to struggle in the months to come.

“We forecast a protracted recession in the United Kingdom, reinforced by the government’s fiscal consolidation in its Autumn Statement. As a result, we expect the Bank of England rate to lag behind the Fed and market participants’ expectation, while we also see the UK central bank easing monetary policy by late next year.”

You may also read: US markets in red as fear of China’s lockdowns rises

The European Commission will publish information on November consumer confidence for the Eurozone later in the day, while the US economic calendar will include the Richmond Fed Manufacturing Index. Investors will continue to monitor central bankers’ remarks closely.

Sterling continues to trade above the key medium-term support of 1.1750. As long as it stays above it, the immediate outlook seems bullish, targeting the psychological level of 1.20 and the 200-day moving average at 1.22. 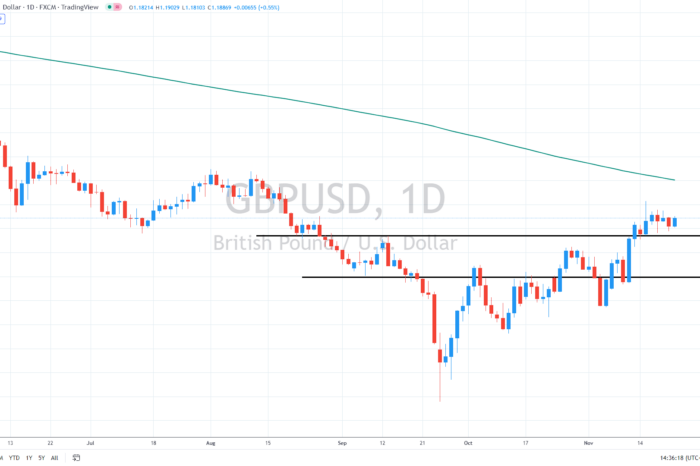