Another record high in UK inflation, but investors seem not to care as the GBP remained in a positive territory following the data.

For now, the GBP/JPY cross halted its uptrend, looking heavy amid some profit-taking. It was seen near 165.80 during the London session.

The UK Office for National Statistics (ONS) stated on Wednesday that the annualized Consumer Prices Index (CPI) for the UK increased to 11.1% in October from the 10.1% recorded in September, exceeding predictions of a 10.7% result. Since October 1981, the index has risen to its greatest point ever. Furthermore, if there had been no energy price guarantee by the government, CPI inflation in October would have been about 13.8%.

The core inflation rate, which excludes volatile food and energy prices, increased last month by 6.5% YoY as opposed to the 6.5% observed in September, above expectations of 6.4%.

According to the monthly data, UK consumer prices increased by 2.0% in October as opposed to the expected 1.7% increase and 0.5% increase in September.

The UK Retail Price Index for October exceeded expectations across the board, coming in at 2.5% MoM and 14.2% YoY.

Sentiment in the markets worsened yesterday following the report that two persons were killed after two Russian-made missiles were reported to have hit Poland, close to the Ukrainian border, prompting a flight for safety.

The most recent information, however, points to the possibility that the missiles that struck Poland were fired by Ukrainian forces in an effort to block additional approaching Russian missiles. Russian government representatives described the Polish event as a plot to incite a direct military confrontation between NATO and Russia.

In other news, early Wednesday, UK Prime Minister Rishi Sunak told Reuters that he will meet with Chinese President Xi to stress the need for “an honest and productive UK-China partnership.”

“China is a country with fundamentally different values to ours, with an authoritarian leadership intent on reshaping the international order,” he added.

Later today, Andrew Bailey, the governor of the Bank of England (BoE), will give testimony before the UK Treasury Select Committee. During these hearings, the BoE Governor and several MPC members testify on inflation and the economic outlook before Parliament’s Treasury Committee. The hearings are a few hours long and can create market volatility. Especially noted are the direct comments made about the currency markets

The second half of the day will see the release of October Retail Sales and Industrial Production figures for the US economy.

It looks like the GBP might decline toward 165.20 today, where the short-term bullish trend line is. This could be the key support area for today’s trading.

You may also read: AUD/USD flies to 2-month highs amid US dollar weakness

On the other hand, the resistance is expected to be at 166.20. Overall, it looks like a bullish triangle pattern, likely leading to another leg higher once the 166.20 zone is broken to the upside. 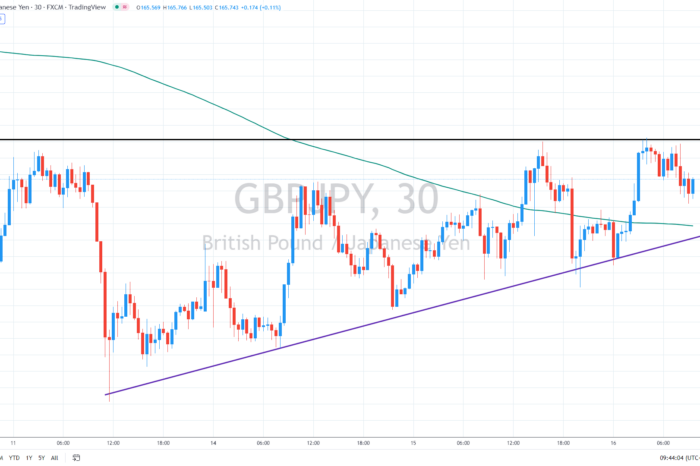