The Bank of Canada delivered a 50 bps rate hike, but it remained hawkish, so more rate increases are coming.

On Wednesday, the Canadian dollar was bought as the Bank of Canada hiked rates, sending the USD/CAD pair notably lower in the initial reaction.

On Wednesday, the Bank of Canada increased benchmark interest rates by 50 bps to 1.00%. Also, it announced plans to begin reducing the size of its balance sheet, starting April 25, given that it sees an increasing risk that expectations of elevated inflation could become entrenched. As a result, the USD/CAD pair dropped 100 pips, sending the pair back toward the 1.25 support.

Given this situation, the monetary policy statement discussed the risks of inflation becoming embedded and inflation expectations unanchored with an acknowledgment that ‘interest rates will need to rise further.

“We look for another 50bp hike on 1 June with the policy rate set to hit 2.75% before year-end. Bullish BoC statement and its relatively aggressive balance sheet run-off should continue to position the Canadian dollar as an out-performer – or one of the currencies best positioned to withstand what should prove a strong, Fed-powered US dollar this summer.” economists at ING think.

Inflation in the USA is getting out of control

Yesterday’s data showed that the Producer Price Index (PPI) rose 11.2% yearly and was up 1.4% monthly. Both were the most since records began in 2010 and above economists’ forecasts. The core PPI, which leaves out volatile food and energy prices, increased by 7% yearly. The 0.9% advance in March was the largest since January 2021.

Later today, the usual Thursday’s US jobless claims will be released, along with retail sales for March, expected to improve notably month on month.

Technically speaking, the failure to remain above the 200-day moving average (the green line) could seem bearish, likely leading to further losses for the USD/CAD pair.

It looks like the price could retest the current double bottom near 1.2450 shortly.

On the other hand, if the USD starts to strengthen again, the resistance is expected to be in the 1.2650 area, where previous highs/lows are converged with the 200-day moving average. 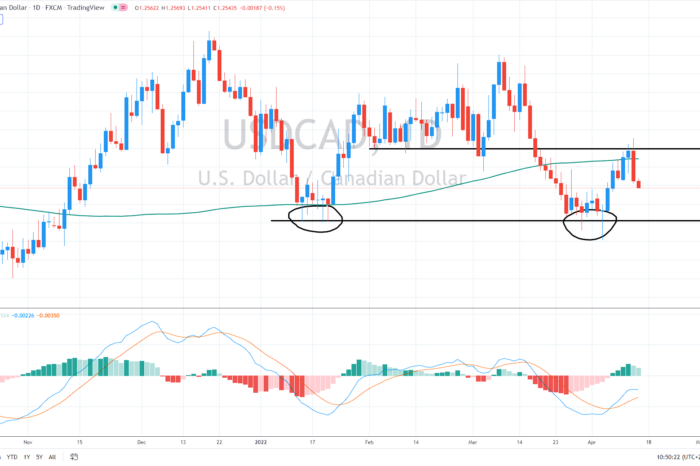