EUR/USD fails to move after ECB, US inflation

Markets were disappointed from no groundbreaking news in the diplomatic talks between Russia and Ukraine, while major macro news also weighed in on sentiment.

Despite some intraday volatility, the EUR/USD pair traded only moderately lower on the day, hovering above the important 1.10 threshold.

ECB with no surprises

Additionally, the central bank signaled it would be tapering its asset purchase program steadily over the summer, with a view to ending it in Q3. There was no exact guidance on raising rates, although the markets expect the ECB to start increasing rates in Q3/Q4 this year.

In its statement, the central bank removed the suggestion that rates could be lower than actual levels.

Earlier today, the latest Italy PPI number for January came in at a stunning 41.8%, and that’s before we factor in the energy price and broader commodity price spike that we’ve seen in the last two months.

As a reminder, the EU inflation is already at a record high of 5.8% and given the events of the last few weeks, it’s likely to go even higher in the coming months.

US inflation continues to rise

Elsewhere, the US inflation met expectations, printing 7.9% year on year for February, up from 7.5% previously. The core inflation, stripped of energy, food, and alcohol prices, rose to 6.4% yearly, also higher than 6% in January.

Regarding the Ukraine situation, the recent round of talks brought nothing new. Rhetoric was little changed but possible Putin-Zelenskiy summit discussed.

Ukraine President Zelenskiy stated that the aim of the talks was to end the war; Prepared for ‘certain compromises’; other side must also compromise. Only direct contact between presidents could end the war.

Yesterday’s rally is still holding, but it did not change the immediate outlook in any way. As long as the pair trades below 1.12, rallies are expected to be sold, with a potential of retesting this week’s lows at 1.08. 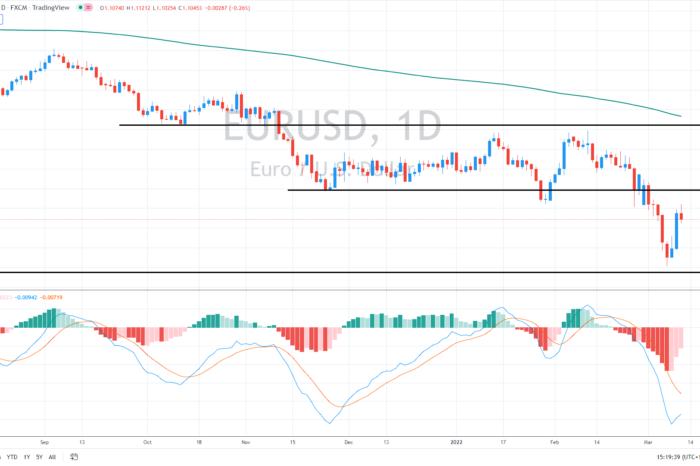