The massive divergence between EU and US monetary policies continues to drive the EUR/USD pair lower each week.

The continuing USD buying and EUR selling has brought the currency pair to the lowest level since March 2017 as EUR/USD briefly declined below the 1.05 psychological level.

The European Central Bank (ECB) stated in a bulletin released on Thursday that Russia’s actions in Ukraine are inflicting significant pain on the European Union.

Several factors point to slow growth also in the period ahead. First, the war is already weighing on the confidence of businesses and consumers, including through the uncertainty it brings. 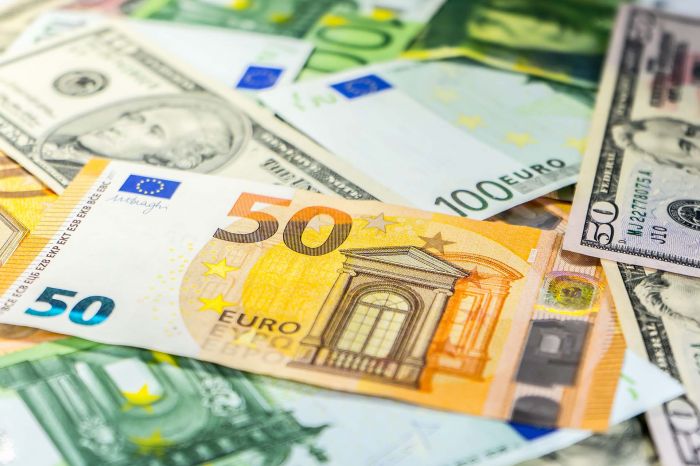 Close up on various EUR and USD banknotes, Source: shutterstock.com

According to market-based indications, energy costs are expected to remain high in the short term but eventually moderate to some level. However, food prices have also risen dramatically.

Prices are also being pushed upward by supply constraints and the normalization of demand as the economy reopens.

In other news, the Financial Times (FT) claims that energy firms in Germany, Austria, Hungary, Slovakia, and possibly Italy are ready to comply with a new payment mechanism for Russian gas demanded by the Kremlin, putting the European Union’s (EU) unity and sanctions at risk.

You may also like: Poland and Bulgaria without Russian gas

The plans demonstrate the consequences of Russian efforts to weaponize gas supply and put the EU’s capacity to maintain a united front against Moscow to the test.

According to Scotiabank economists, the increased risk of a Russian gas embargo might wipe out the European Central Bank (ECB) rate rises forecast by markets.

Building economic pessimism and disadvantageous monetary policy divergence between the ECB and the Fed places the EUR at a clear risk of testing its early-2017 low of 1.0341 in the coming days or weeks. They said:

“If Russia shuts off energy flows, the bloc’s industrial complex may have to heavily reduce output, flipping the Eurozone into recession. Moreover, this would pave the way to a test of parity for the EUR as Eurozone financial outflows mount due to a worsening economic outlook forcing the ECB to put off hikes.”

US data in focus

The regular Thursday unemployment claims are coming later today, and they are expected to improve somewhat. Furthermore, the US preliminary GDP for the first quarter will be reported, with investors anticipating a dramatic decline to just 1.1 percent annualized, down from 6.9 percent the previous quarter.

However, if history provides any indication, the estimates will very certainly be revised upward in the following readings, as standard data gathering systems haven’t fully responded to changes in working patterns throughout the epidemic.