The German DAX index traded lower during the EU session on Friday as investors decided to take profits from the recent colossal rally.

However, due to the fact that Wall Street will shut early on Friday due to Thursday’s Thanksgiving holiday, the trading session is anticipated to be quiet in Europe on Friday.

According to the latest German GDP figures for the third quarter, growth in the biggest economy in the Eurozone increased by 0.4% over the previous quarter.

You may also read: Solvency of Coinbase is questionable as COIN is down 90%

German economic growth in the third quarter was 1.2% on an annual basis, a dramatic decline from the 1.7% increase reported in the same period a year earlier.

Additionally, there were hints of recovery in the GfK German Consumer Climate Index, which increased from -41.9 in November to -40.2 in December.

Elsewhere, the chief economist of the European Central Bank (ECB), Philip Lane, predicted on Friday that “wages will be the main driver of inflation over the next years.”

“Staggered nature of wage setting means that adjustment of nominal wages to the cumulative increase in the cost of living will play out over several years,” he added.

In other news, Bloomberg reported that while China confronts an epidemic that has expanded since the nation launched a more focused strategy to limit the virus, the number of daily Covid infections increased to a record high, surpassing the previous peak in April.

The news also stated that the nation reported 29,754 new cases on Wednesday, above the 28,973 illnesses noted in mid-April when Shanghai’s financial center was experiencing a tough two-month lockdown that left inhabitants unable to acquire food and medical care.

The DAX index has been trading in a consolidative pattern but seems ready to break down from that formation, with the support near 14,500€. If we see a break below that level today, the outlook could change to bearish, targeting previous lows near 14,380€.

Alternatively, in case bulls reappear near the mentioned support, a rally toward the current cycle highs at 14,575€ could occur. 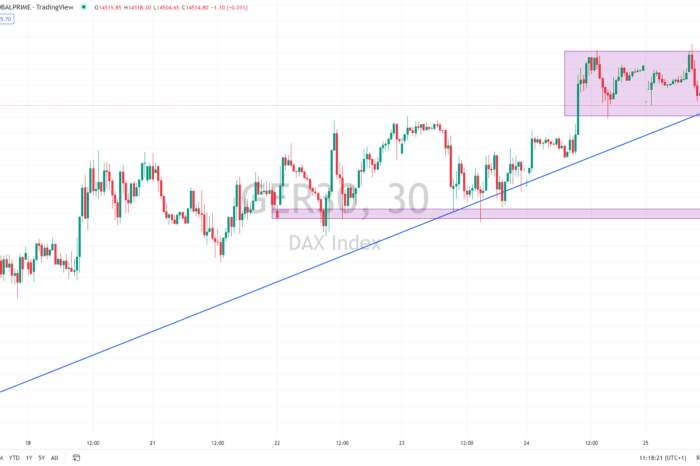