We could see some nice movements after today's US jobs report, with the DAX index sitting at key support heading into the release.

As investors prepared for today’s headline US macroeconomic event, due later in the session, volatility has been lower today. As of writing, the German DAX index traded flattish, hovering near 12,440 EUR.

Germany is in a recession

According to official data by Destatis on Friday, Germany’s retail sales decreased by 1.3% MoM in August compared to a 1.0% expectation and 1.9% the previous month.

The annualized decline in the bloc’s retail sales in August was 4.3% as opposed to the -5.1% forecast and the 2.6% decline seen in July.

Moreover, the official figures released on Friday indicated that industrial production in Germany decreased more than anticipated in August, reflecting a slowdown in the activity of the manufacturing sector.

According to data corrected for seasonal and calendar factors, the industrial production of the economic engine of the Eurozone decreased by 0.8% MoM, compared to a -0.5% projected and -0.3% previous, according to the federal statistics body Destatis.

US jobs market in focus

Richard Hunter, head of markets at Interactive Investor, said: “Ahead of arguably the most eagerly awaited economic release of all, investors continue to grapple with the resolution which the Federal Reserve continues to demonstrate in its fight against inflation.”

According to forecasts for the US non-farm payrolls data, 250,000 jobs were added in September, down from 315,000 the month prior, while the unemployment rate stayed the same at 3.7%. Given that the Fed will continue to have free rein to pursue its policies, a stronger-than-expected result could send risk assets, such as stocks, lower.

A bad result, on the other hand, may give rise to hopes that aggressive rate hikes are starting to have an impact, which would, in turn, reignite the optimism about a Fed flip that boosted markets earlier in the week.

The 12,400 EUR support is again back in play as the recent surge above it has run out of steam. If the index jumps after today’s data, a short-term bullish trend could begin, targeting this week’s highs near 12,700 EUR or possibly the 13,000 EUR threshold.

You may also read: Anyone can now bet against Jim Cramer with new Inverse ETF

Alternatively, if the index falls below 12,400 EUR, bears could regain control, likely sending the price back to the current cycle lows near 12,000 EUR. 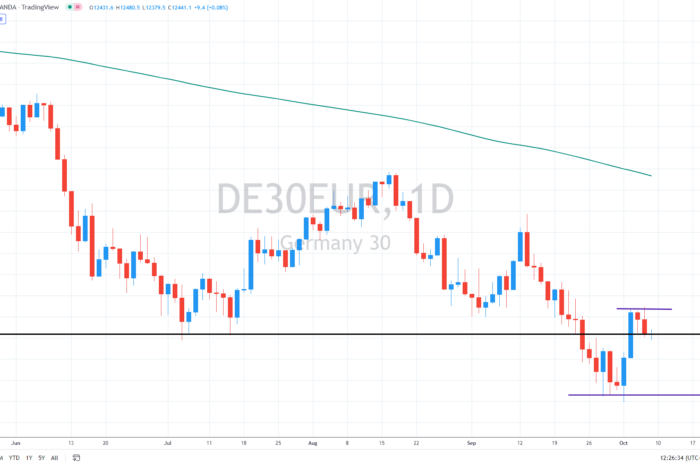