The Australian dollar closed lower on Friday, however, it traded notably higher off the week’s lows, rising nearly 2%, as investors sold the greenback following the FOMC minutes.

In an effort to support the coronavirus-affected economy, China’s central bank announced on Friday that it had reduced the amount of cash that banks must keep in reserve for the second time this year. Analysts praised the move as “not too late” but noted that Beijing still needs to implement more encouraging policies to revive the faltering economy.

The reserve requirement ratio (RRR) will be reduced by 0.25% to 7.8% on December 5, according to the People’s Bank of China (PBOC), adding around 500 billion yuan (US$70 billion) in long-term liquidity.

You may also read: No proper sales in the markets on Black Friday

The PBOC last reduced the RRR in April when it announced a 0.25 % point drop after 0.5% point reductions in both July and December of the previous year. The decision on Friday came after a State Council meeting on Tuesday presided over by Premier Li Keqiang, who noted that the fourth quarter was an “important period” for consolidating the economic recovery.

The PBOC reiterated that it would not participate in a “flood-like” stimulus but said that the action was intended to maintain “appropriate and sufficient liquidity” to sustain the economy at a “reasonable” growth pace.

On the other hand, the prospect of a less dramatic pace of monetary tightening in the United States as early as next month caused US Treasury rates to fall to seven-week lows earlier Friday, negatively impacting the dollar recently.

“The Fed minutes surprised on the dovish side, signaling strong support for slower rate hikes and weaker support for Powell’s higher-for-longer rhetoric,” said analysts at ING in a note. “The dollar could stay pressured for a bit longer, but it’s probably embedding a good deal of Fed-related negatives now.”

The short-term outlook seems bullish. First, however, bulls must push the price above last week’s highs of 0.68 or risk forming a double-top pattern. In that scenario, bears could counterattack quickly, with the target at this week’s lows of 0.66, which is the neckline of the double-top formation. 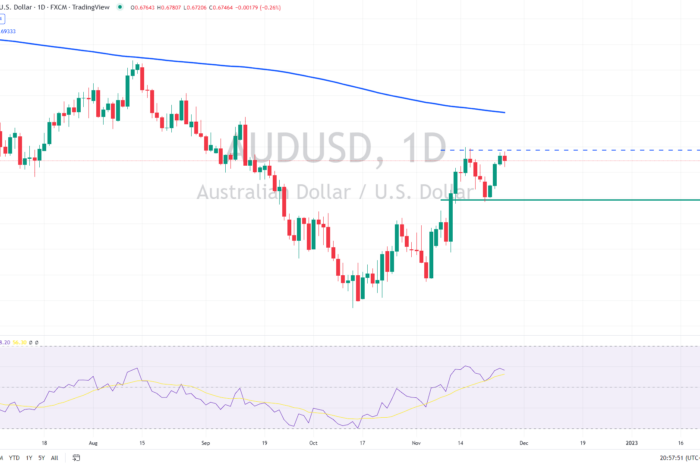