Traders quickly sold the post-RBA rally as the USD has strengthened broadly today.

The Australian dollar erased daily gains as sentiment in the markets deteriorated today, benefiting the US dollar. At the time of writing, the AUD/USD pair traded flat near 0.7190, down from daily highs of 0.7250.

Earlier today, the Reserve Bank of Australia (RBA) defied market forecasts and raised the benchmark rate by 50 bps to 0.85%. Investors had expected a 25bps rate hike only.

However, the following RBA Rate Statement looked less desirable for AUD/USD bulls, as it appeared to be less hawkish than predicted.

The essential highlights from the RBA’s June monetary policy announcement, as given by Governor Phillip Lowe, are listed here, courtesy of Reuters.

– Inflation in Australia has increased significantly.
– Committed to doing what is necessary to ensure that inflation in Australia returns to target over time.
– The size and timing of future interest rate increases will be guided by the incoming data and the board’s assessment of inflation and labor market outlook.
– Today’s increase in interest rates will assist with the return of inflation to target over time.

“The board expects to take further steps in the process of normalizing monetary conditions in Australia over the months ahead,” Lowe added.

The Australian Labor Department recorded only a 4,000 increase in April, far less than the 30,000 expected. The RBA’s extraordinary policy tightening will drive businesses to apply additional filters on investment possibilities. This will cause the Employment Change to sag even further.

The US economic calendar will include data on the April Goods Trade Balance and Consumer Credit Change later in the afternoon.

Despite the recent sell-off, the daily chart still appears bullish as the Aussie has been posting higher lows and higher highs – the definition of a bull market.

The resistance is expected to be at the 200-day moving average (the green line) in the 0.7255 area. Once the Aussie jumps above it, the medium-term uptrend could be confirmed, targeting the 0.74 zone in the initial reaction.

Alternatively, if bears reappear, the support is expected in the 0.7160/70 zone, where previous lows are. If the pair drops below that level, the immediate outlook might change to bearish. 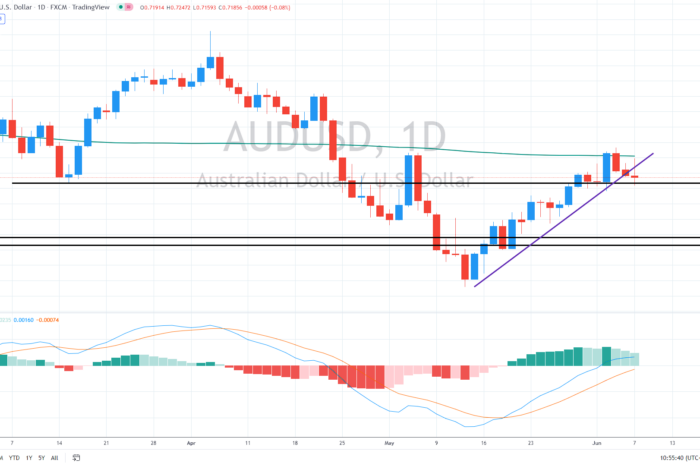