The Aussie has been pressured by a decline in industrial metals, which have been falling on concerns about global economic growth.

The Australian dollar remained offered on Monday, diving 1%, and falling toward the psychological level of 0.70 for the first time since late January.

The International Monetary Fund predicted that global growth would be close to the pre-pandemic norm of 3.5% in research released over the weekend. However, that report has failed to provide any optimistic market stimulus.

In other news, China’s trade surplus increased more than projected, with imports and exports coming out above estimates.

You may also read: Oil continues in surge after EU ban talks

Additionally, China had imposed a tighter curfew in Shanghai and Beijing earlier, raising fears about global economic development and recession.

On the other hand, concerns about unstoppable inflation, leading to aggressive monetary policy tightening in the US, support the US dollar broadly. Meanwhile, the dollar index jumped beyond the 104 level – the highest since 2002.

Economists at MUFG Bank are adopting a more cautious outlook for commodity-related currencies in the near term.

“We could be at a tipping point where a further move higher in prices could now be viewed as less supportive for commodity-related currencies in so far as they serve to reinforce fears over a sharper slowdown in global growth ahead.”

It looks like the 0.6960 – 0.70 could be the last major support for bulls. Large stop-losses could be triggered if the Australian dollar drops below that zone, likely sending the Aussie further lower.

From the weekly chart, the following support might be at 0.68, where June 2020 lows are.

Alternatively, the AUD/USD pair must jump above 0.7050 to stabilize short-term, while a break beyond 0.7160 could further encourage bulls. 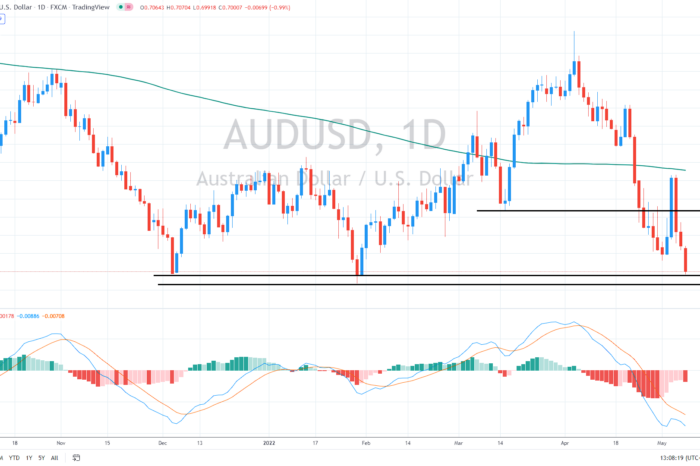