Traders bought the Aussie following some optimistic news from Australia and China, while the USD weakened.

The Australian dollar enjoyed solid gains, boosted by the recent macroeconomic data series, which brought the AUD/USD pair back to one-month highs at 0.72.

Australia’s first-quarter GDP increased by 0.8%, compared to 0.7% projected and 3.4% the previous quarter. As a result, the annualized GDP climbed 3.3%, contrary to a market expectation of 3.0% YoY and 4.2% in prior reports.

Given the interruptions caused by omicron and severe floods in NSW and Queensland, analysts at Westpac predicted a weaker print in activity in a note released ahead of the report today.

“Consumer spending and public demand were predicted to contribute to growth, but corporate investment and housing were expected to remain sluggish,” according to the report.

The most crucial metric from today’s Q1 GDP data will be the average earnings gauge of salaries.

“Partial data show a substantial increase in yearly growth to approximately 5%,” they noted before the data. If we’re correct, this will keep the possibility of a 40-basis-point hike at the June meeting alive.” as per ANZ Bank analysts.

Additionally, the Chinese Caixin manufacturing PMI also exceeded expectations, printing 48.1 in May, up from 46 prior and 47 projected.

You may also like: Gold accumulates volume around support level

The US ISM manufacturing survey for May is out later today, and it is expected to fall from 55.4 to 54.5 points. However, the prices paid subindex, sometimes known as the inflation gauge, will almost certainly continue to rise. JOLTS job vacancies will be announced at the same time.

The short-term outlook appears bullish as long as the Australian dollar trades above 0.7170. The next target could be at the 200-day moving average at 0.7260, where previous highs are also located.

Alternatively, a decline below 0.7170 could cause further selling pressure, targeting 0.71 in the initial reaction. 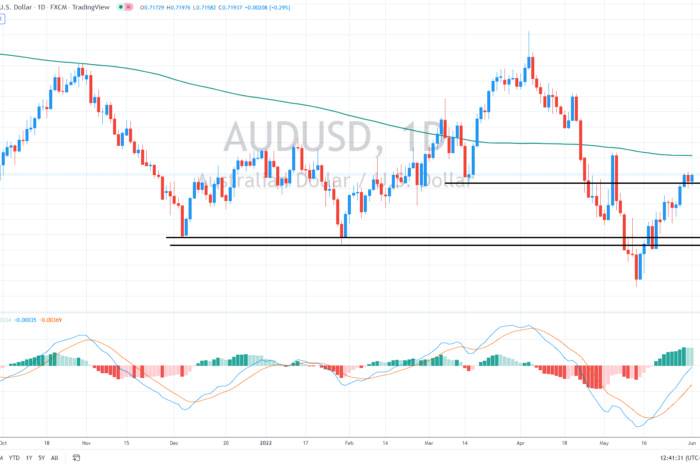