Both Amazon and Apple released weak outlooks, likely leading to further losses in the stock market during today's US trading session.

The FAAMGs were effectively killed out when Amazon released its Q3 results on Thursday. Not only did Amazon miss sales targets and show dismal AWS data, but its prognosis was also a complete failure.

However, despite poor revenue and, at best, average AWS performance, the reason why AMZN stock is collapsing after hours is due to the company’s disastrous guidance.

The stock was down circa 20% in the after-hours trading before retracing half of the losses, still losing 13% heading into today’s trading session. 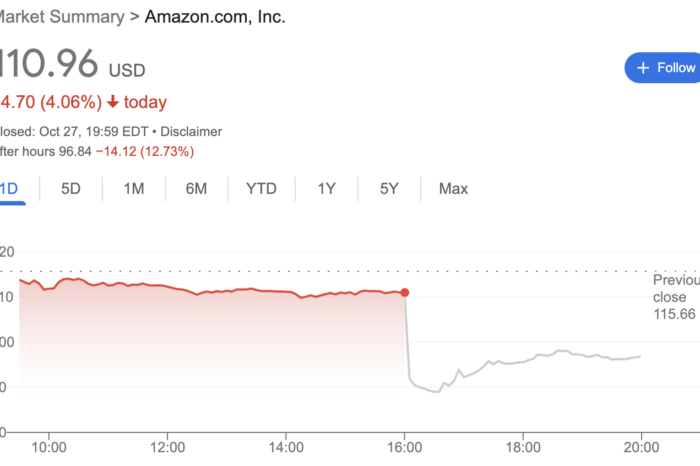 During the earnings call, Amazon stated that the third quarter’s sales growth slowed down over time. The company anticipates that the challenges of inflation, rising gasoline prices, and decreased demand will continue into the fourth quarter.

Additionally, according to Amazon CFO Brian Olsavsky, there might be further costs reductions. The corporation will continue to invest in high-growth industries like cloud computing and Amazon advertising. However, the company would “look at our cost structure and areas where we can save money.”

On the other hand, the biggest company in the world, Apple, fared much better.

However, the company dramatically reduced its outlook during the earnings call. 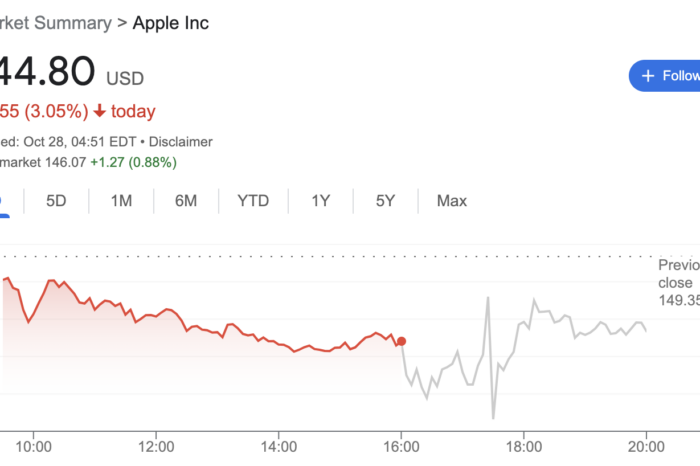 Compared to the 4Q, the company’s overall sales growth will slow down. Because of the difficult comparison to the debut of the new MacBook Pro last year, Mac revenue will significantly fall in the Christmas period.

Nevertheless, the stock price traded flat in the after-hours period.

You may also read: ECB follows Fed and lifts interest rates by 75bps

Finally, Apple hasn’t specifically mentioned the strong dollar or the use of constant-currency conversions. Still, CFO Maestri did state that services revenues would increase by double digits in constant currency and that the company is experiencing softness in the gaming (likely App Store and Apple Arcade) and digital advertising sectors.

Maestri added that Apple’s first-quarter revenue would probably be affected by currency fluctuations by 10%. That’s far worse than many of their IT counterparts (MSFT claimed that cloud revenues were impacted by FX by 5%).