Meta was already under water for some time after it announced its Metaverse plans, but the situation continues to worsen.

While many investors could’ve thought Meta stock is oversold, another plunge came. Meta stock plunged 20% after hours in a single day. Is this the time to buy the dip?

The company reported earnings of $1.64 a share and revenue of $27.7 billion. However, analysts expected Meta to report earnings of $1.90 a share with a revenue of $27.4 billion. Spending on the Metaverse, along with the slowing growth of social networking and digital advertising, negatively impacted its earnings.

It's the largest campaign finance penalty anywhere in the country — ever. Today, a King County judge ordered Facebook to pay the maximum penalty for its campaign finance violations: $24,660,000. Learn more: https://t.co/cyIiGm1NNf pic.twitter.com/prARywa4x8

It’s also worth noting that the Metaverse division of the company lost approximately $3.7 billion in Q3. However, the company is well aware of its losses. Meta expects things to turn around in the long run while suffering losses in the short term.

Meta also had its second negative revenue growth quarter but the biggest revenue decline ever recorded. The vision of Metaverse is definitely hurting the company more than anyone could’ve imagined before. As a result, Zuckerberg’s fight with the world seems to be ongoing. 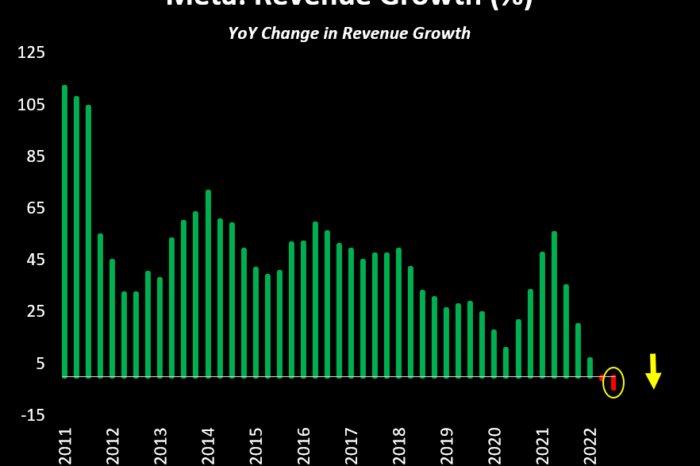 Is this the end of Meta?

Meta’s stock price plunged to multi-year lows in the after-trading hours. The stock fell by 20% to $104, its lowest since early 2016. Zuckerberg’s Metaverse vision is taking its toll on the stock price, which could send it even lower in the next months. The company just crossed $100 billion in revenue last year, raking in almost $118 billion. 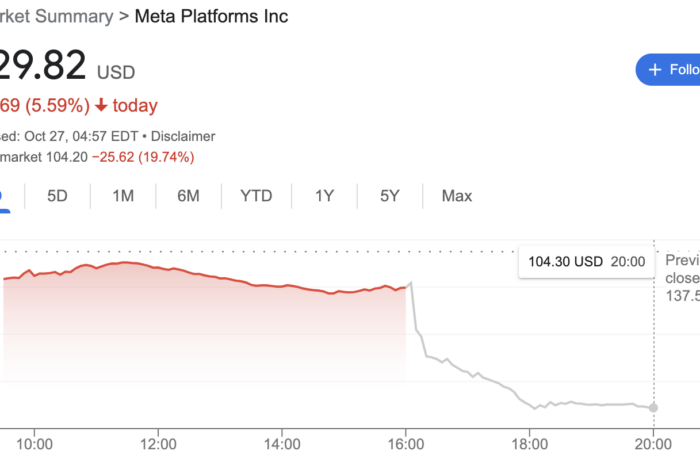 The stock decline in 2022 is the biggest ever recorded, as Meta is down 73% from its all-time high (ATH) level of $384. The second largest fall happened in 2018 when the stock fell by about 45%. The drop of this scale wiped out hundreds of billions in the market cap while making the stock more appealing to investors.

Also read: Will crypto become a part of retirement portfolios?

While the company’s growth slowed down, several indicators are starting to turn green again. P/E, P/B, P/S and other ratios are low, which indicates that the time to buy may be here soon. However, high inflation, increasing interest rates and the vision of Metaverse are still hurting the company.

Meta will probably continue to struggle in the next few months, but when the situation improves regarding its Metaverse, it might be an excellent opportunity to buy the stock again. The current global slowdown hurt the whole FAANG (Facebook, Apple, Amazon, Netflix, Google) as the entire stock market turned south, but this is definitely not the end of Meta.