DAX surges in optimistic start of the week

Inflation worries persist as price pressures continue to soar, but equity investors pay most attention to the Ukraine-Russia news.

On Monday, equity investors remained buoyant, buying EU stocks and pushing the DAX 3% higher during the London session. The German benchmark was trying to breach above the psychological hurdle of 14,000 EUR.

The weekend brought no significant developments in the Ukrainian war, although markets are hoping for some diplomatic solution, ideally later this week. Danske Bank said:

“Both Russia and Ukraine have expressed optimism that peace talks have made progress and that results could materialize in the coming days. The fourth round of talks begins today.“

Last week, the US BLS reported that the CPI inflation rose 7.9% year-over-year in February, the highest rate since 1982. The core gauge accelerated to 6.4% yearly. Some economists are projecting that CPI could reach 9% in March.

Tuesday’s release of February PPI inflation will be under scrutiny too. The consensus estimate is for a 0.9% monthly rise and a year-over-year gain of 10%, up from 9.7% in January.

In response to soaring inflation, the FOMC’s highly-anticipated policy meeting begins on Tuesday, with a press conference scheduled for Wednesday. After that, the Fed will hike rates by 25 basis points, although more rate increases are on schedule throughout the year, likely keeping bonds and stocks under pressure.

The same situation is in the eurozone, where the CPI inflation is expected to jump to new all-time highs in February and March. Moreover, considering the recent trends in commodity prices, there will be more and more inflation pressures worldwide.

On the other hand, the ECB will likely raise rates only once this year as the central bank continues to downplay the inflation threat.

Earlier today, the German wholesale price index was released, which shows the value of sales made by wholesalers in Germany, and it decreased to 1.7% month-on-month, from 2.3% previously. Still, the yearly change accelerated to 16.6%, against 16.2% in January.

It is challenging to find any significant supports or resistances in the current volatile market conditions. However, it looks like the major resistance is seen in the 14,000 EUR area. Therefore, if the DAX closes above it, we might see further relief rally toward 15,000 EUR.

Alternatively, the support could be found in the 13,600 EUR region, and if not held, the index could decline toward 13,000 EUR or possibly retest the current cycle lows near 12,500 EUR. 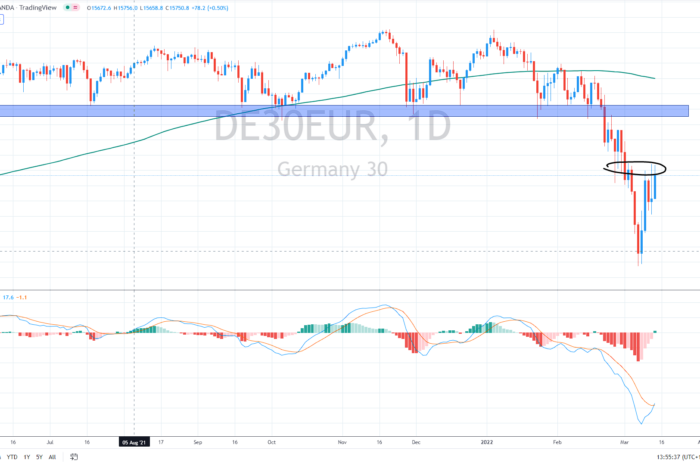