This week, the SP500 index has dropped below the important 200-day moving average as traders remain indecisive about the short-term outlook.

US equities dropped sharply on Thursday as tensions between Russia and USA escalated, but sentiment improved today, sending equity futures higher during the London session.

The risk-on approach was seen in the markets after State Department spokesperson Ned Price said in a statement that Russia responded to a US offer for a meeting between Blinken and Lavrov in Europe with proposed dates for late next week, and the US has accepted “provided there is no further Russian invasion of Ukraine.”

Earlier in the week, one of the most respected Wall Street strategists, repo market guru, and former NY Fed official, Zoltan Pozsar suggested that “We need a Volcker moment… a Volcker moment, where Vol stands for “vol” – as in volatility.” In other words, Pozsar writes that the Fed needs to crash the market to contain inflation.

As Rabobank’s Michael Every summarized the Fed’s predicament, “more worrying is that [the FOMC] were non-committal about what the Fed will do at its March meeting because the Fed has no idea what to do. All its choices are bad.

Lastly, Rabobank’s Fed-watcher Philip Marey said that “Policy rates are at the zero bound and the Fed is still buying assets when GDP growth is 6.9%, CPI inflation is 7.5% and unemployment is 4.0%. Is this rational monetary policy or are the lunatics running the asylum?”

To summarize, the Fed is now trapped. It can’t stop inflation (by tightening monetary policy) without causing the markets to collapse, or the economy to crash. They are stuck in their own trap, already falling behind inflation as it remains at 40-year highs and still rising.

The index trades again below the important 200-day moving average as traders remain indecisive about where to go. The Russia conflict might be over soon (hopefully diplomatically), and that would certainly reroute the focus back to inflation pressures and the oncoming monetary policy tightening.

As long as the index stays below the 200DMA, currently near 4,470 USD, the medium-term outlook appears bearish, with a potential to retest the current cycle lows near 4,300 USD. 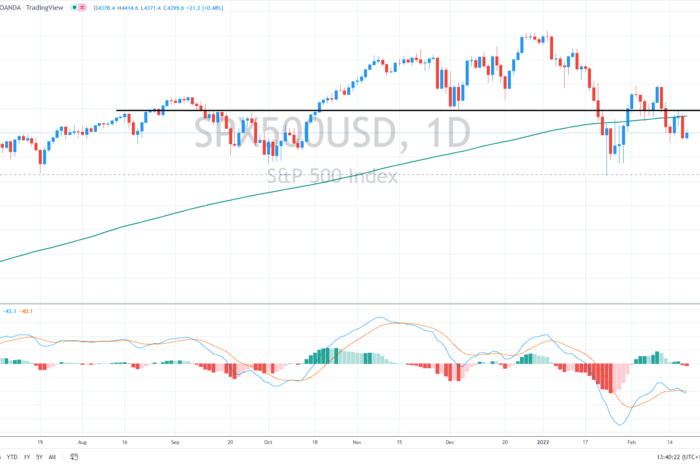