Sentiment appeared positive on Friday as we are experiencing some pause in the heavy selling from previous days.

The Dow Jones index was one percent higher ahead of the US session, changing hands at around 31,950 USD, trying to recover some of this week’s sharp losses.

Despite the upbeat tone, Susannah Streeter, senior investment and markets analyst at Hargreaves Lansdown, said investors were continuing to wrestle with worries over inflation as the oil price climbs back up again and supply concerns resurface amid ongoing geopolitical tensions.

“As the era of cheap money has hurtled to an end, lowering liquidity in the markets, trading in the sessions ahead is set to stay volatile,” she said.

Additionally, Fed Chairman Powell told Marketplace after the market closed on Thursday that the central bank is not “actively contemplating” raising interest rates by 75 basis points and that the economy may not be able to achieve a “soft landing.”

Meanwhile, the Core Producer Price Index (PPI) in the United States fell to 8.8 percent in April from 9.6 percent in March, falling short of the market consensus of 8.9 percent. Additionally, in April, the Consumer Price Index (CPI) was 8.3% higher than a year ago.

You may also read: Germany is trying to negotiate gas supply terms with Qatar

The United States has been experiencing its most serious inflation crisis since the 1970s and early 1980s, when prices soared at a 14.5% annual pace. Then-Fed Chairman Paul Volcker employed punitive interest rates to twice send the economy into recession.

The May Michigan consumer confidence index is out later today, and it is expected to drop slightly to 64 from 65.2 earlier. As anxiety about increasing prices, the crisis in Ukraine, and supply chain delays connected to China’s COVID-19 lockdowns continued to weigh on confidence, the index remained at decade-low levels.

Nothing has changed in the daily chart, and the overall outlook remains bearish as the index posts lower highs and lower lows – a clear definition of a downtrend.

However, the short-term situation seems heavily oversold, likely leading to a short-squeeze rally. If the index jumps above 32,200 USD, the intraday sentiment could improve further, targeting 32,800 USD. 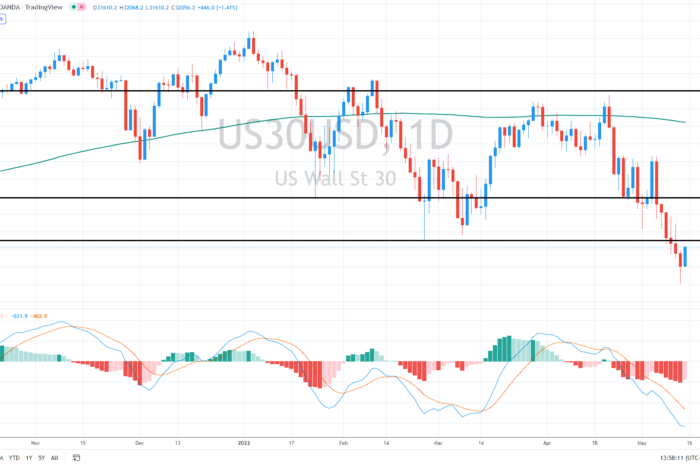