She confirmed that the ECB would increase rates by 25 basis points in July, but there is an optionality to raise by more in September. If the inflation outlook does not improve, the central bank will have sufficient information to move faster.

Beyond September, a “gradual but sustained” path of further rate increases will be appropriate.

On the other hand, inflation pressures are intensifying and broadening through the domestic economy. As a result, supply shocks hitting the economy could linger for longer.

Additionally, In June, consumer confidence in Germany reached all-time lows. In June, the GfK forward-looking barometer sank to -27.4 points, the lowest reading since the start of the series in 1991. Customers thought there was a reasonable probability the German economy would deteriorate. The expectation of income has reached a 20-year low.

As investors rebalance their portfolios between the end of the month, the second quarter, and the first half of the year, J.P. Morgan strategist Marko Kolanovic projected that US stocks might rise as much as 7% this week. Positive sentiment in the US could also bolster European indices, such as the DAX index.

The index has managed to break out from the falling wedge pattern (a bullish reversal formation). Moreover, the price has already retested the broken trend line and jumped higher, thus, confirming the breakout.

Therefore, the immediate outlook seems bullish, targeting previous highs at 13,430 EUR. If the price jumps above that level, we might see another leg higher, toward 13,660 EUR. The bullish breakout has also been confirmed by the bullish divergence between the MACD indicator and the price.

Alternatively, if sentiment deteriorates again, the support could be at the trend line near 13,100 EUR, and if not held, the price might drop below the critical 13,000 EUR threshold. 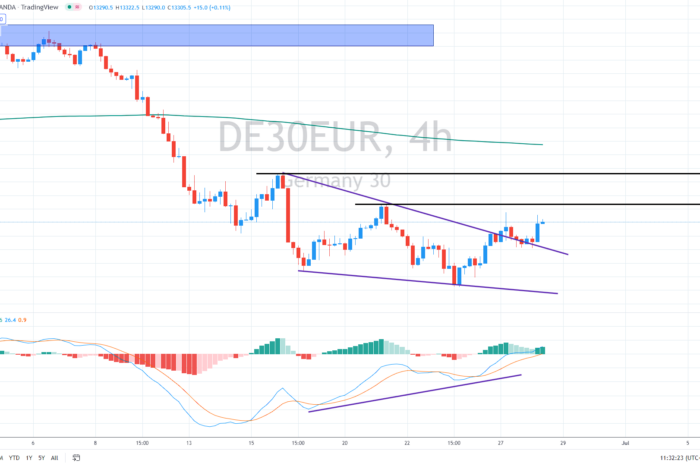