The FTX collapse is worse than anyone could’ve imagined. However, it is opening new doors for the industry. The crypto space is now free of certain scammers and a new light of transparency is gleaming.

Several major crypto exchanges, such as Binance, OKX, Huobi, KuCoin, and others showed their proof of reserves to avoid troubles. Investors got very sceptical over the FTX crash and the only way exchanges can win their trust back is through a credible audit and a positive balance sheet.

However, Grayscale Investments declined to show its proof of reserves. So is it really just for security reasons or are they in trouble?

Grayscale in the spotlight

While confirming that each of Grayscale’s cryptocurrency products is fully supported, Grayscale refrained from sharing the wallet addresses or on-chain proof of reserves to reveal the underlying assets of its products because of security concerns. It may sound reasonable, but it’s also a red flag.

6) Coinbase frequently performs on-chain validation. Due to security concerns, we do not make such on-chain wallet information and confirmation information publicly available through a cryptographic Proof-of-Reserve, or other advanced cryptographic accounting procedure.

When responding to investor concerns on Twitter on November 18th, Grayscale provided details about the security and storage of its cryptocurrency holdings. The company further stated that all of the cryptocurrency used to back its investment products is kept in Coinbase’s custody service without providing the wallet addresses.

“We know the preceding point in particular will be a disappointment to some, but panic sparked by others is not a good enough reason to circumvent complex security arrangements that have kept our investors’ assets safe for years,” the tweet stated.

That actually makes sense. It’s like 2018 all over again. Panic prevails, but it probably won’t last for long. Grayscale realizes that which is the reason for their decision.

Proof of reserves is a technique used in the crypto world that enables users to see whether or not an independent auditor has proved the reserves of a particular exchange or company. It gathers data using Merkle Trees and generates a set of fingerprints that allow customers to confirm that an outside party correctly audited their funds.

Grayscale acknowledged that some investors would be disappointed by their choice to keep its reserve information confidential. The business countered that fear provoked by others is not a good enough excuse to disregard sophisticated security measures that have safeguarded their investors’ money for years.

However, the most recent disclosure has only weakened user confidence in Grayscale. Given that other significant before-mentioned cryptocurrency exchanges have revealed their proof of reserves, it appears that the company’s justification does not persuade the vast majority of crypto users.

It is obvious from the Grayscale Bitcoin Trust (GBTC), the biggest publicly available crypto fund in the world. CoinDesk reports that it currently trades at a 43% discount to the price of the underlying asset – Bitcoin. Trouble in paradise? 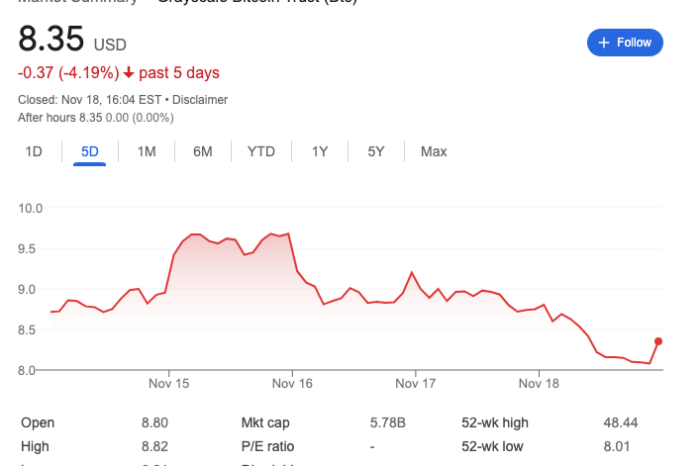 This is mainly due to close ties between Genesis Global Capital and Grayscale Investments. In response to the consequences of Sam Bankman-Fried’s (SBF) exchange failing, Genesis declared halting of its customer withdrawals. This is something unheard of.

In the world of finance and investing, it's just like that – once you're up, and once you're down 📈📉

One of the largest players in the field might be on the brink of bankruptcy, and it could cause a massive market crash. It has the potential to reset the whole crypto market, wiping out most of it. Grayscale told investors that their products would continue to function normally, further claiming Genesis was not their counterparty or service provider. Since March 2021, the GBTC shares have not traded at a premium to the underlying bitcoin.

The GBTC shares have not traded at a premium to the underlying Bitcoin since March 2021, Coinglass data reveals. The premium even got bigger with the current market turmoil and SEC’s rejection to convert the fund into an exchange-traded fund (ETF).

No one is safe. Even Nouriel Roubini, a well-known economist, warns Bitcoin could drop even lower than anticipated. The potential bankruptcy of Grayscale, along with Genesis, has the power to hurt the crypto market so hard it would take years to rebuild. It would be a major setback if Grayscale, a holder of approximately 600,000 bitcoins fails, but it’s not necessarily the end of crypto.