Investors are worried that the spike in credit default swaps may worsen the situation and cause a lot of problems.

Shares of Credit Suisse tumble amid investors’ concerns about its balance sheet and CDS spike. Will 2008 repeat itself? Is Credit Suisse the next Lehman Brothers?

Credit Suisse executives reportedly spent the weekend assuring investors, big clients, and counterparties on their liquidity and capital position. The Credit Suisse credit default swaps (CDS) grew sharply on Friday, which concerns many as credit markets rated the company’s risk of default as the highest in a decade.

$600 Billion: What Lehman Brothers held in assets when they crashed and took the economy with them.

Credit Suisse is at a 'Critical Moment' now, says the CEO.

What lies in store for the world?🧵 pic.twitter.com/VIaMU7dSLX

While Ulrich Korner, the CEO of the bank, tries to calm the markets, Credit Suisse and Deutsche Bank have 4.6x more assets under management (AUM) than Lehman Brothers did before they crashed. This is a huge red flag. The stock is now down 60% this year and 10% early today. 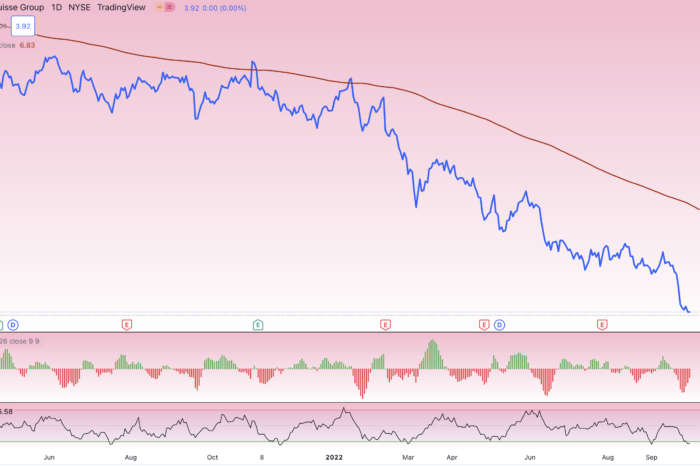 “We are in the process of reshaping Credit Suisse for a long-term, sustainable future – with significant potential for value creation. Given the deep franchise we have, with a longstanding focus on serving some of the world’s most successful entrepreneurs, I am confident we have what it takes to succeed,” said Korner.

The bank experienced a sharp decline in its 2.7 billion CHF profits in 2020 to a loss of 1.65 billion CHF last year. This turnover is caused primarily by significant losses on its investments in failed supply chain finance group Greensill and hedge fund Archegos.

US authorities have allegedly charged the founder of Archegos, Bill Hwang, and three others with racketeering and fraud offenses following the collapse of the company. Credit Suisse has also paid 350 million GBP fines for its fraudulent bonds from last year.

The situation right now is awfully similar to the one in 2008. Still, bankers keep stating that they understand the nature of people’s concerns but claim that balance sheets are significantly different in terms of liquidity and capital available. But is the situation really different or is it potentially even worse than in was in 2008?