Porsche IPO could raise up to $9.4 billion for Volkswagen

It looks like the Volkswagen stock price could advance toward the 200-day moving average after the news.

According to a recent Bloomberg story, Volkswagen hopes to generate up to $9.4 billion from its impending IPO of Porsche. According to the source, that would make it the most extensive listing in Europe in “more than a decade.”

The business said this past weekend that it was aiming for a 70 to 75 billion euros valuation for its IPO, down from an earlier estimate of 85 billion, amid chaos in both the European capital and car markets.

As the article points out, market volatility has also reduced expectations for other upcoming IPOs, such as Intel’s planned IPO for Mobileye.

But Porsche, T. Rowe Price, ADQ, Qatar Investment Authority, and Norway’s sovereign wealth fund have all agreed to subscribe to preferred shares worth up to 3.7 billion euros.

You may also read: Weekly macro report – The hedged market could add some gains

We are currently in the home stretch with the plans for Porsche’s IPO, and we appreciate the dedication of our cornerstone investors, VW’s Chief Financial Officer Arno Antlitz told Bloomberg.

VW has marketed the investment opportunity as a means to combine the most outstanding qualities of brands like Louis Vuitton and Ferrari.

Porsche wants to earn 39 billion euros in sales this year. The Porsche-Piech family, which lost control of the business more than ten years ago following a dispute with VW, would also be given decision-making authority as a result of the IPO, according to the story.

25% of Porsche’s preferred shares will be available for subscription by investors; these shares will not include voting rights. The Porsche-Piech family has committed to purchasing 25% or more of the voting common shares of the firm and has agreed to pay a 7.5% premium above the range of prices.

Despite the spin-off, some have questioned its long-term independence due to Oliver Blume, Porsche’s CEO, being chosen to lead Volkswagen.

Back in bullish trend?

The company stock price is trying to return above the medium-term uptrend line, with the resistance near the 150 EUR area. If bulls are successful, it could indicate further gains in the near term, likely targeting the 200-day average at 157 EUR.

On the downside, the support is seen near 140 EUR, and if not held, the price will likely fall toward the currency cycle lows at 120 EUR. 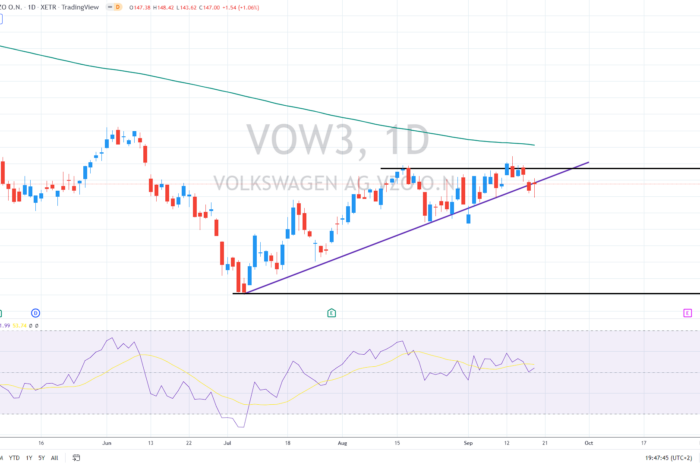