Our inflationary monetary system has been "the norm" for over a century, but the deflationary aspect of Bitcoin makes Peter Zeihan offensive.

The latest Joe Rogan Show hosted a geopolitical analyst, Peter Zeihan, who was very vocal in his skepticism on cryptocurrencies. This made Crypto Twitter (CT) very angry, because of obviously wrong conclusions.

.@PeterZeihan fails to even straw man bitcoin correctly in this clip.

“If currency is locked in at a specific number, you get monetary inflation and that is one of the fastest ways to destroy an economic model.” pic.twitter.com/6v5C7Yu9im

Wrong assumptions all over the place

“There is no intrinsic value to this asset,” Zeihan said in a video. Meanwhile, Bitcoin’s market cap is currently $336 billion. And that is only Bitcoin. It is also accepted as a form of payment in many ways, but most people prefer hodling the asset because of its long-term uptrend.

Related article: Crypto outlook for 2023: more pain to come or will Bitcoin recover?

“You can’t use a fixed supply currency because you get monetary inflation which makes the currency more expensive and that is one of the fastest ways to destroy an economic model,” he stated in the podcast.

This is very wrong as Bitcoin is a deflationary asset, not an inflationary currency like the US dollar, euro, sterling, etc. The fixed supply is what makes Bitcoin more valuable over time compared to currencies.

More and more of a given currency are needed to purchase the same quantity of goods and services regarding an “inflationary currency.” A Twitter user called “Croesus” described this beautifully in the graph below. The purchasing power of Bitcoin is quite the opposite of the US dollar. 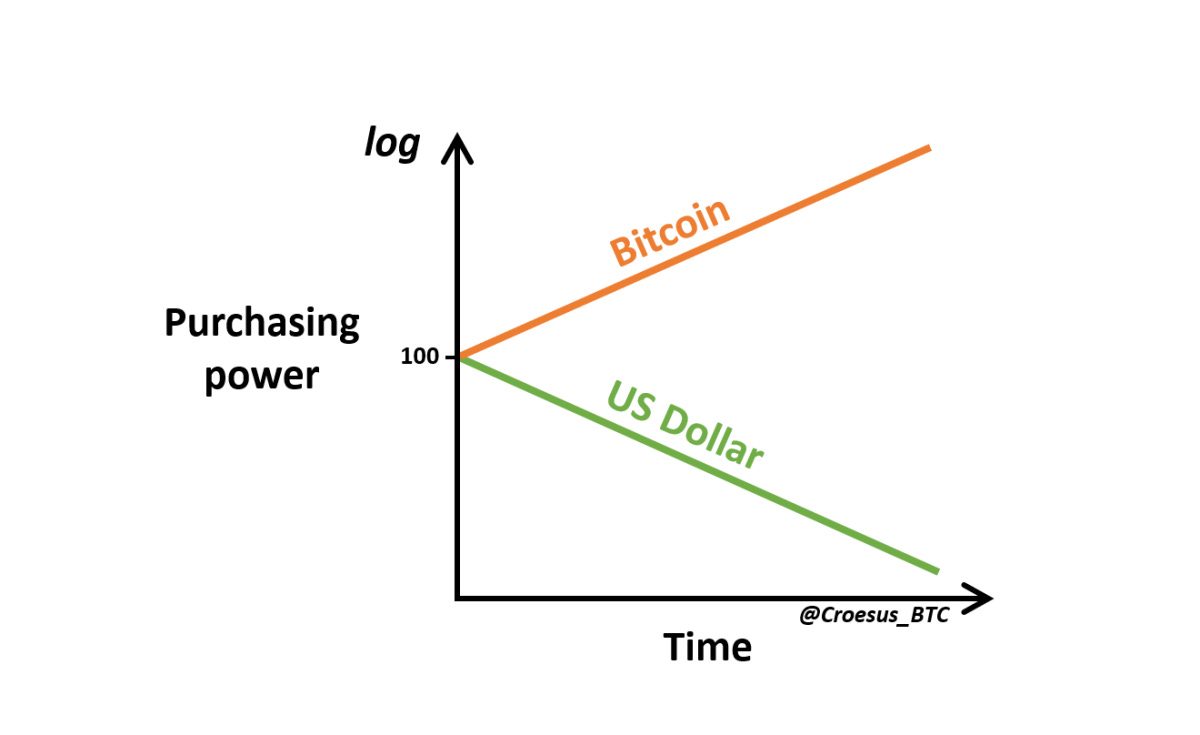 Purchasing power of Bitcoin vs US dollar, source: link

Zeihan continues by assuming money’s main function is to buy things. We have been socialized to believe this, but our modern fiat currencies are useless as long-term savings vehicles, which is the currency’s primary use case. On the other hand, Bitcoin is great as a store of value as it rises in the long run.

Bitcoin not only excels at the primary function of a currency (as a good savings vehicle), but its increasing cost over time is irrelevant to everyday transactions.

“If a worker earns 3 Bitcoin per year today, and in a few years the value of Bitcoin has risen such that that same worker now earns 0.3 Bitcoin per year, it might feel like this currency isn’t working. But, if that worker experiences a 10x deflation in their wages, that’s because the cost of everything has also deflated 10x,” Croesus explained in the article.

Since the value of a currency unit is independent of its current value, they have not experienced a decline in their standard of living. A system’s prices are relative to everything else in it. A currency can never be too expensive to use, as Zeihan puts it.

Finally, Zeihan has a fundamental assumption about the world that is incorrect. He is completely oblivious to the realities of modern history when he concludes that a deflationary currency regime doesn’t work.

Since the advent of central banking in 1913 with the formation of the Federal Reserve, we have been enduring a period of persistent currency inflation. This is likely to stay but Bitcoin may have become the smart choice which cannot be ignored with its already proven 13-year track record.